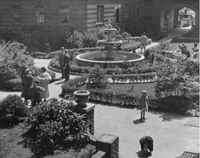 With the stock of affordable housing in New York City shrinking, and requirements that some city workers reside within the five boroughs and nearby suburbs, some unions are entering the real estate market to directly provide or subsidize housing for their members. The firefighters union recently announced that it was considering using some of its $7.2 billion pension fund to invest in real estate that would be used to provide affordable housing for New York's Bravest and their families. According to NY1, the union hasn't determined whether it would sell or rent to its members, but any development is still years in the future.

The New York Teachers' Retirement System is investing $28 million of its pension fund in bonds to subsidize the construction of two housing developments in the Bronx. The 234 units will be rented to city schoolteachers at prices that range from $806 a month for a studio to $1,412 a month for a three bedroom apartment. The development is an attempt to staunch the flow of employees who quit teaching because they cannot afford to live in the city. Of course, 234 rental units is not a lot to offer a teacher population of approximately 80,000 in New York, and a lottery would be administered to employees making less than 110% of the area's median income.

NY1 recently examined how another expensive city––Tokyo––helped members of its police force with housing. Rookie cops in NYC have starting salaries of approximately $25,000 a year, and have difficulty affording city life their first few years on the job. In Tokyo, the Metropolitan Police Dept. provides younger officers the option of residing in dorms, and married officers are entitled to a relatively small but clean apartment their first ten years on the force.