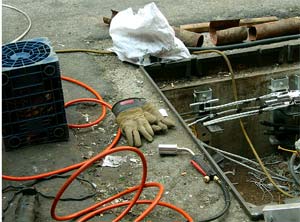 Thousands of Con Ed employees may be striking tomorrow, if the utility keeps up their act. Joe Flaherty, spokesman for the Local 1-2 of the Utility Workers Union of America, said of Con Ed's 0.5% base raise, "They want us to strike, no doubt about it. Half a percent, followed by 1% in the years after that, is just asinine."

Flaherty says the union made their wage proposal on June 18, "After 12 today (noon yesterday), nine days later and with 36 hours to go, they gave us a proposal. That means they're not showing any serious intention to bargain." He says his members are ready to picket various Con Ed properties, including offices and substations. The union has also filed an "Unfair Labor Practice" charge with the National Labor Relations Board, claiming Con Ed is "bargaining in bad faith" (PDF).

However, Con Ed tells the Journal News, "We continue to negotiate in good faith with the union leadership and are working to agree on a new contract that is fair and equitable for our employees. In the interests of respecting the process, we will not discuss details of our talks." The contract is up early tomorrow; the last time Con Ed employees went on strike was in 1983.

Photograph of abandoned glove by Rachel Pincus on Flickr