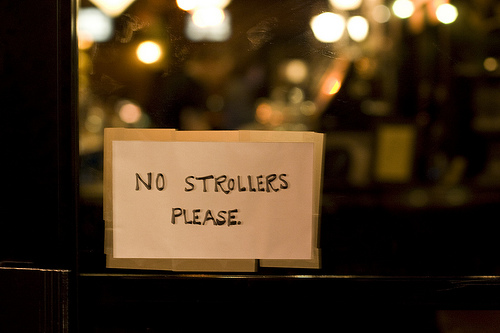 Last weekend we took a look at Union Hall's new baby ban. The owner, Jim Carden, upset a lot of stroller-pushers when he declared kids would no longer be allowed in the establishment and put up a sign reading: "no strollers please". He asked nicely, but the Park Slope parents weren't having it. They rallied together on blogs to gain back the right to booze it up with their babies on board.

They won. Today the Brooklyn Paper's Smartmom announces that "the bar will once again welcome in moms and their kids for some downtime (and drinks!) a few afternoons a week." Prompting the question: "can we all get along?" Most likely the regular bar set won't be at the bar on the afternoons, but it's inevitable that they'll have something to say about it. The problem is mostly with parenting skills, many imbibing baby-watchers don't, in fact, watch their babies too closely, leaving employees and patrons chasing after their children.

“It was strictly liability,” Carden said. “A lot of parents are great and mindful. But some are not that attentive to their kids when they’re in here. This is a bar with an open stairwell and a bocce court. This is a business and we don’t have the staff to police it.”

While there will be a few "off hour" afternoons that allow the under-aged, there will no longer be "mommy groups". But we're sure a much more appropriate venue can be found for such a thing, right?

#brooklyn
#brooklyn paper
#flickr
#park slope
#stroller ban
#union hall
Do you know the scoop? Comment below or Send us a Tip