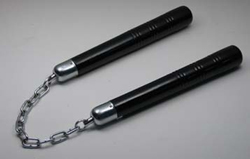 A jury felt a father went too far in trying to find out where his daughter was. Fifty-three-year-old Javed Khalid and three other Pakistani natives were found guilty yesterday in a Brooklyn courtroom of charges that Khalid led the torture the uncle of his daughter's new husband.

Kahlid's daughter Maryam ran off at the age of 16 and got married to her 19-year-old classmate Usaman Rana in 2006. Unable to ascertain her whereabouts and enraged that his young daughter had eloped (she was promised to a "rich suitor in Pakistan") , Khalid and three friends broke into the Coney Island home of Rana's uncle and beat him with a hammer, nunchuks, antique sword, brass knuckles and more, demanding to know the location of the newlyweds.

While the prosecution's case essentially rested simply on the testimony of Rana Hussain, the uncle who was attacked. Jurors saw photo evidence of injuries that Hussain suffered, but they seemed less severe than what would be expected by the victim's account of his ordeal. The New York Post spoke to several jurors about their deliberations and one particularly damning piece of evidence was provided by the runaway bride herself. "A set of letters sent by Maryam to the police, expressing outrage at the attack, helped the jurors believe Hussain." Her whereabouts remain unknown.

The four convicted men now face between five and 25 years in prison. Ironically, a group of approximately 100 supporters of the defendants wound up hurting the men rather than helping them. They appeared on the day that Rana Hussain took the stand to describe his assault and their presence was viewed by jurors as an attempt to intimidate him. At any rate, Khalid told the Daily News last week, "I just want my daughter back! If they want to marry, I will marry them. I just want her to be old enough. I forgive her. I love her."