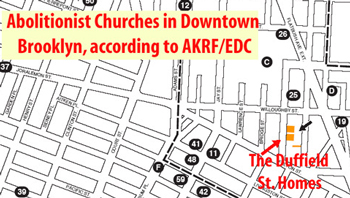 A number of buildings with a possible connection to Brooklyn's abolitionist past and the Underground Railroad may be razed to make way for a public park and an underground parking garage. The commuter daily amNewYork reported yesterday that the Duffield Houses are slated for replacement by a public park along the lines of Manhattan's Bryant Park, mixed-use residential and commercial development, and the expansion of local colleges. Opponents to the plan include Lewis Greenstein, who owns the building at 233 Duffield St., which was built in 1847 and allegedly played a role in helping escaped slaves make their way to Canada. (Good coverage of the issue at Duffield St. Underground.)

The city recently paid $500,000 for a study to research claims of an underground railroad link, and The Gowanus Lounge reported that a marathon session in the City Council going over that study acknowledged that no certain evidence could be found, but that the study did not rule out the possibility of future evidence arising. The disputed property currently occupied by six homes to be seized by eminent domain will form a 1.15 acre green space called Willoughby Square Park, underneath which will be a parking garage holding 700 vehicles. 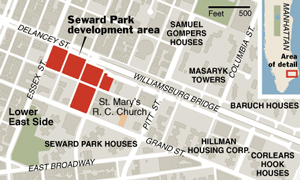 Meanwhile, across the East River from Brooklyn, a piece of valuable city-owned real estate lies vacant, not as a park or place of historic interest, but as a testament to battling civic wills and political intransigence. The New York Times describes real estate gridlock:

Attempts over the years to do anything with those lots have failed. On one side are housing advocates who want to preserve housing for residents of modest means as the area goes upscale with nightspots, high-rises and renovated tenements. Their efforts have been rebuffed by residents of the nearby co-op complexes — built by labor unions for their members decades ago, but in more recent years home to young professionals paying higher prices — who want to protect their investment with development that is mostly, though not exclusively, market rate.

People who used to live in buildings on the lots were told they had 90 days to relocate before their homes were torn down. That was 40 years ago. One woman forced to evacuate in 1967 still lives nearby and regards the empty lots wistfully, wondering why she was forced to abandon her home for absolutely nothing. The Times article is a valuable look at how competing interests––economic, social, and political––can serve to strangle an area, even just a few blocks, and leave a blighted series of empty lots as the result.

(Brooklyn graphic from undergroundrailroadsafehouses.org, via The Gowanus Lounge. Map of the LES from The New York Times)