A film about maniacal road warriors doing bloody battle across the post-apocalyptic outback is the number one movie in America. In Texas, a brawl between biker gangs resulted in 9 deaths and 170 arrests. And in New York, two bikers charged in the brutal beating of a motorist on Manhattan's west side two years ago are now on trial. One of them is NYPD Detective Wojciech Braszczok. "Good we're not in front of a jury," Braszczok's defense attorney John Arlia told his client on Tuesday as they waited for court to be in session.

Detective Braszczcok, who appears in court dressed in a fashionably cut blue suit,‬ had just shown Arlia an article about the Texas shootout. His ‪haircut still hints at the faux-hawk he sported while he was an undercover cop infiltrating the Occupy Wall Street scene; entering and exiting the courtroom every day, he assiduously covers his head in a towel, in some cases needing to be led by the hand by his legal team to keep from bumping into things.

Detective Braszczok, who has been suspended without pay since the incident, is charged with first-degree gang assault and seven other felonies for his part in the events of September 19th, 2013, a day he was off from his day job of surveilling OWS. Braszczok has opted to have his case tried in front of a judge, not a jury.

Standing trial with Braszczok is Robert Sims, an electrician who also took part in the ride. Sims is also charged with first-degree gang assault and seven other felonies. Both defendants are facing up to 25 years in prison on the top charge, both have opted to have a judge determine the verdict instead of a jury, and both have pleaded not guilty. 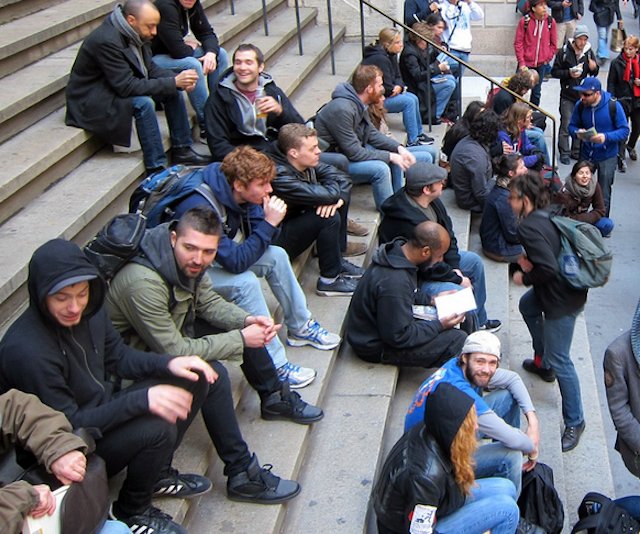 Detective Braszczok, sporting a fauxhawk, a grey hoodie, and black tennis shoes, on the steps of Federal Hall during Occupy's Spring Training in April of 2012 (Scott Lynch / Gothamist)

As reconstructed through video evidence and eyewitness testimony this week, the conflict between Alexian Lien, who was driving his wife and two-year-old daughter up the West Side Highway to the Paramus Mall, and bikers taking part in the Hollywood's Block Party motorcycle rally, essentially unfolded across the entire length of Manhattan.

Leaving their Battery Park City home, Lien and his wife, Rosalyn Ng, were surprised to find their Range Rover SUV surrounded by hundreds of bikers, some riding 4-wheel ATVs and non-street-legal dirt bikes, popping wheelies, running red lights en masse, and choking traffic. Lien tried to get around the bikers, but angered one of them, who punched out the Land Rover's left side-view mirror.

As Lein's SUV and the bike swarm moved north, Ng tossed a half-eaten plum and a water bottle out of the window, which seemed to further anger some of the motorcyclists. Near the 125th Street exit, one of the bikers, Christopher Cruz, braked in front of the SUV, and Lien, unable to stop in time, bumped the motorcycle. Bikers swarmed the vehicle, some dismounting and approaching Lein's car.

"What do I do? What do I do" Lien recalled asking his wife. "Just drive, just drive," she answered. Lien lurched forward, riding up over several motorcycles and running over one biker, Edwin Mieses, paralyzing him.

Many of the bikers gave chase. Ng described her panicked efforts to call 911 again, dialing with both her phone and her husband's. Near the George Washington Bridge exit, there was another confrontation. Blocked by another vehicle, Lien came to a stop. One biker, identified by prosecutors as Sims, dismounted, raced up to the SUV, and pulled the door open.

Sims initially told police that he wanted to remove the keys from the ignition, to keep Lien from escaping the consequences of running over Mieses, but that when he opened the door, Lien "had a look of fear on his face," causing Sims to back off. Video of the incident shows Lien speeding off with the door still open, and doesn't appear to show Sims backing off at all. 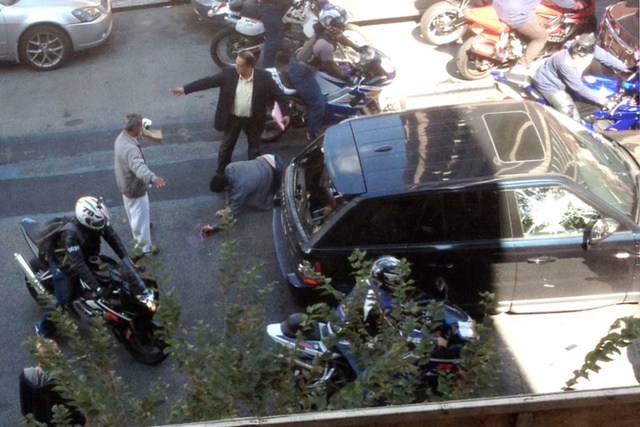 Rattling through the surface streets of upper Manhattan, with his front right tire rolling on a rim, the Range Rover finally came to a stop on 178th street, where bikers pulled Lien from the vehicle, punching, kicking, and stomping him, as well as bludgeoning him with their helmets. Lien suffered a chipped tooth and facial scarring as a result of the beating.

Ng testified that two bikers also attempted to pull her out of the car—one of them, allegedly Sims, said to her, "Bitch, you're going to get it also."—but that her seat-belt prevented them from pulling her out. She retreated into the back seat to check on her two-year-old, who she says was covered in glass from the shattered rear window.

Kevin Bresloff, the Long Island motorcycle mechanic who shot one of the widely circulated videos on his helmet-mounted GoPro camera, took the stand to put the video in context.

Led by prosecutor Joshua Steinglass, Bresloff soberly explained to the court the mechanics of "popping a wheelie" and its more esoteric variant, the "seat-stander." Bresloff is shown on the video popping wheelies himself, but he hasn't been charged with anything in relation to the bike rally. His footage follows events up the West Side Highway, but cuts out at precisely the moment the ultraviolence on 178th Street begins. Bresloff claims his camera's battery cut out. He shot other video later in the day, but he told the court that was after recharging the camera.

Why didn't he do anything to stop the beating? Steinglass asked him. "I was kinda frightened at the time," Bresloff answered.

Detective Braszczok initially told his NYPD handler, who testified anonymously at a pre-trial hearing, that "there were too many people, and he would have been overwhelmed" had he tried to intervene, and that he wasn't present for the beating.

At a meeting a few days later, after video had surfaced showing him hitting the SUV, Braszczok reversed himself and admitted he had been present. The undercover detective had in fact alerted his handler that he'd be taking part in the Hollywood's Block Party rally, sending him a text message predicting "mayhem."

"Why are you texting me this shit?" the handler says he asked Braszczok, who texted back, "I'm only kidding, man."

Braszczock wasn't the only police officer participating in the lawless ride. Internal affairs cop Matthew Rodriguez admitted he was at the rally, as did Detective Samir Gonsalves. The NYPD reportedly investigated the involvement of as many six city cops who took part in the rally and were present either on the West Side Highway or 178th Street.

Prosecutors blame Braszczok for smashing out the rear window, and video appears to show him striking it with his helmet. But when Arlia mounts Braszczok's defense in coming weeks, he intends to argue that the forensic evidence shows his client couldn't have been responsible for the damage as prosecutors claim.

Braszczok's defense acknowledges that he probably ought to have called for backup when a horde of motorcyclists started thrashing a motorist in front of his wife and children, but insists he's innocent of the charges. They portray Braszczok as a police officer trying to do the right thing, pursuing Lien for the innocent and noble purpose of making sure he didn't escape the consequences of the incident on the West Side Highway.

A lone undercover police officer, without his badge and gun, he was unable to stop the beating, but did not take part in it himself, the defense claims.

The trial resumes Tuesday and is expected to last at least two more weeks.