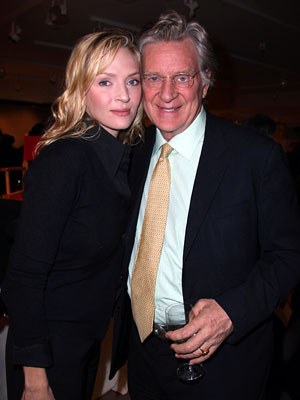 Yesterday, on the actress's 38th birthday, Uma Thurman's parents headed to court to testify in front of a Manhattan jury about their daughter's stalker. Jack Jordan, an unemployed pool cleaner, was called "delusional" by Robert Thurman (pictured), who Jordan began contacting in 2004; the email that set of the alarms was one received in February 2005, stating, “Today the center of my forehead is ticking now and then. I feel in love with your daughter Uma.”

The NY Times reports that the Thurman's testimony suggested that part of what "attracted the intellectual Mr. Jordan, 37, a graduate of the University of Chicago," was the allure was the family's distinctiveness. Uma's father is a Columbia professor, the co-founder of the Tibet House and an ex-Buddhist monk; while her mother was a Ford model back in the 60s. They are both active Buddhists, and reportedly Jordan's contact has "shattered the family's sense of peace."

Birgitte Thurman told of how Jordan "believed he and my daughter had a predestined life, that he knew this and she didn't. I tried to explain this is a fantasy. ... My daughter has no interest in meeting him. He said if that was the case, then there was no meaning in life for him, he would have to kill himself." He's even mentioned their wedding night in email correspondences.

The Post reports that the fantasies go even further, Jordan seems to think he's become a part of the A-list Hollywood scene, calling Angelina Jolie: "One of our allies," and Ethan Hawke: "that charlatan."

Ms. Thurman herself will be testifying in court tomorrow, against the only stalker in her lifetime who has shown up at both her workplace and doorstep. Jordan is being charged with misdemeanor stalking and harassment.