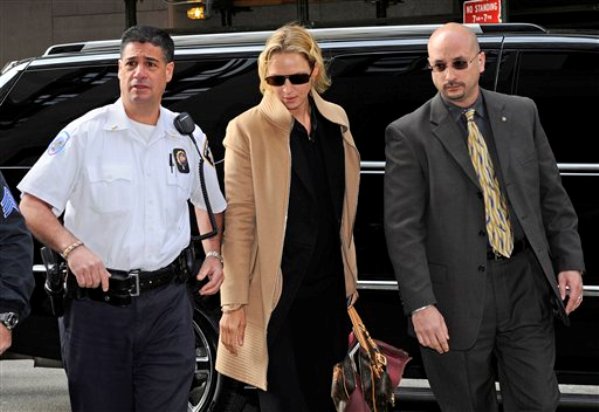 Following her parents testimony, Uma Thurman herself showed up at court today to face her stalker. The NY Post reports back that Thurman read excerpts from stalker Jack Jordan's notes to her, as "she pulled a shawl over her shoulders and hunched over as though overcome with a chill." She said Jordan's behavior was distressing, "It wasn't just a red herring or a fluke or a bad day. The fact that he had my parents home number and had arrived at the set and come back when he was told to leave started to paint a picture much worse than some isolated moment."

WNBC has been liveblogging the trial, noting when Thurman described the note Jordan left when he showed up on the set of "My Super Ex-Girlfriend".

She says it looked "very disturbed," written in spiraled writing, half crossed out. Uma noticed the words "my hands should be on your body." Uma said "I was completely freaked out…It was like a nightmare, it was scary." She says that inside the envelope was torn paper, there was a picture of a bride with a head torn off and there was a dollar bill. She read some of the card that said "Dear Uma" on it.

She says that on the back of card there was a drawing with stick figures and a razor blade. Uma says she felt "sick." There was also a gravestone drawn that said RIP on it with an open grave.

Perhaps more creepy is that Jordan has been doodling on a notepad during her testimony today. Court is still in session; during the lunch break Jordan got flooded by camera flash lights as his attorney claimed he never realized how disturbing his actions were to Thurman.

#court
#Jack Jordan
#stalker
#stalking
#testimony
#uma thurman
Do you know the scoop? Comment below or Send us a Tip