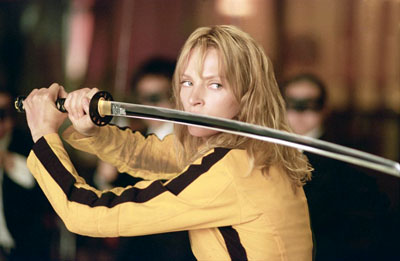 For her testimony against stalker Jack Jordan yesterday, The NY Times described Uma's appearance as being "pared-down," as she donned "a gray shawl thrown over black slacks and a black sweater. Her golden hair was carelessly knotted in back, with long strands hanging down both sides of her face. She wore no makeup and looked thin and hollow-eyed."

Thurman testified that she was "freaked out" by Jordan's contact with her (and her family), including an appearance on her Greenwich Village doorstep which resulted in an arrest. Detective Edward Yzaguirre testified that Jordan was found by officers smelling poorly and with "a pay stub and papers from the Atlantic Armory Shelter in Brooklyn and the city’s Department of Homeless Services." Yesterday, even though he didn't make eye contact with the starlet, he did splash on some cologne and pop a breath mint before entering the court room.

Though she talked about an email Jordan sent her which referred to "spending time in a cave with her mummified body," by the end of the day it was his references to her children that had her the most shaken up. The Daily News reports that he would refer to her daughter as an "illusion," and sent her an email saying "If a voice tells you to kill a child, maybe you should ignore it. Maybe? Maybe?"

Jordan takes the stand today, and has stated that he "was trying to meet her."

#court
#Jack Jordan
#stalker
#stalking
#testimony
#uma thurman
Do you know the scoop? Comment below or Send us a Tip