Ultra-Orthodox Williamsburg Jews Promise A Chance At Cash For Votes

New York Election Law § 17-142 states that any person who "offers or promises to pay, lend or contribute any money or other valuable consideration to induce such voter or other person to vote or refrain from voting at any election" is guilty of a felony. That being said, South Williamsburg voters at IS 71 can get a chance to win $250 cash prizes and gift certificates—all they have to do is cast a ballot.

A 16-year-old who said he was being paid $350 to man a booth a little more than 100 feet from the polling station at IS 71 told us that families of area yeshiva students received this card in the mail before the election. The card promises entry into a raffle boasting $250 cash prizes and gift certificates when presented to a worker after voting. You could also pick up one of the special cards from a van sitting outside the polling station. 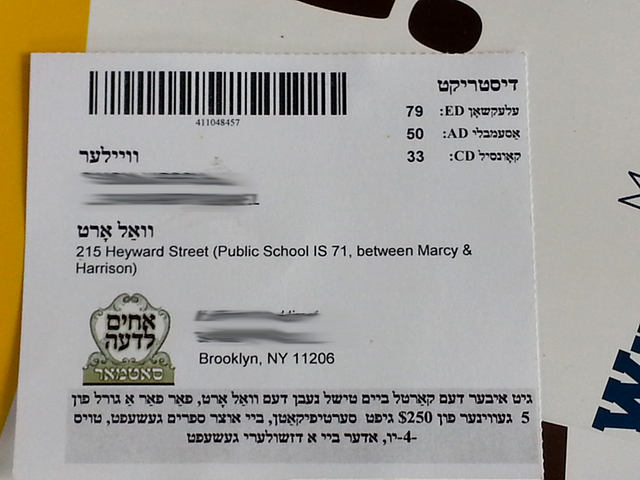 A closeup of the card for those acquainted with Yiddish (Gothamist)

Another worker told us that the United Jewish Organizations, a "Hasidic umbrella group" dominated by the Satmars, was sponsoring the raffle, and said that voters were given literature suggesting that they vote the UJO's candidates, but that it's not mandatory.

"They just give out a name for who to vote for, it's not like you have to vote for them, they can do whatever they want," said the man, who declined to give his name. "We just want to get people to come out. It's basically an idea to get people out of their homes and out of their job, because if not they're gonna stay at home."

Who does the UJC seemingly endorse? According to the literature taped to the table: Bill Thompson for mayor, Stephen Levin for councilmember, Scott Stringer for Comptroller, Daniel Squadron for Public Advocate and Charles Hynes for Brooklyn DA.

The 16-year-old at the table told us that the voters handed him cards because "They agreed to vote for Hynes." We were told that there were at least five of these tables at other voting locations in Williamsburg.

As we've previously reported, Hynes is fighting for the Satmar's invaluable support against challenger Ken Thompson, while also fighting mounting evidence that as DA he protected the identities of sex abusers in the Hasidic community.

Two messages to the head of the UJO, Rabbi David Niederman, have not yet been returned.The Daily News spoke with Rabbi Niederman about a similar raffle in 2006, and he repeated what the man we spoke to said: anyone who votes and turns in a card is entered into the contest, it doesn't matter who they vote for.

[UPDATE] In an email, UJO leader Rabbi David Niederman, writes, "The UJO is a 501(c)(3) organization barred from intervening on behalf of or against any candidate for public office. UJO is not involved in the get out the vote operation and no one is authorized to use our name for such purposes."

Asked why the man told us that he was working for his organization, Rabbi Niederman responded, "UJO or myself hasn’t hired or asked anyone to get involved in the get out the vote operation. As I mentioned previously, we are not involved in get out the vote operations whatsoever. To the best of my recollection 2006 was the last time that happened."

Read our followup to this story here.