Ultra-Orthodox attendees of an anti-vaccination event in Borough Park on Tuesday night were confronted by members of their own community who hoped to dissuade them from attending—or convince them to reconsider their choice not to vaccinate.

Midwood resident Ben Rivlin got to the event, at the Ateres Chaya Hall, early so he could tape up his handmade sign reading “VACCINATION IS IMPORTANT! STOP THE PROPAGANDA AND LIES!!!"

“I want to send the message that Orthodox people do care about vaccines and health,” he said. Security guards soon made him remove the fliers.

“I’m not gonna get anybody to not go in,” Rivlin said. “But there should at least be noise that people are against this.”

Here’s the one pro-vax protesters. pic.twitter.com/sp7G6JQnDi

Anti-vaccination activists with a group calling itself “United Jewish Community Council” were hosting the vaccine symposium at a catering hall. The event featured regulars on the anti-vaccination circuit including Del Bigtree, who hosts an anti-vaccination Youtube channel. Bigtree headlined a similar gathering in Monsey last month and later attended a rally in Albany against the removal of religious exemptions to vaccines.

“I think it’s absurd to say I’ve had any impact on this community whatsoever and their decision whether or not to vaccinate,” Bigtree said, speaking to reporters before entering the venue Tuesday night. He went on describe a rise in autoimmune diseases and neurological disorders that he said, coincides with an increase in required vaccines.

“When you look at that coterminous event, what we’re seeing is the greatest decline in public health in human history and therefore I think we have got to question the medical establishment,” Bigtree said.

Vaccination advocate Anna Barkovski came armed with a stack of with pamphlets written by a group of Orthodox nurses debunking some of the highly cited anti-vaccination propaganda that’s targeted their community.

“I think everybody’s responsible for their health choices but I want people’s choices to be based on science and on facts, not on some propaganda or fear mongering of [the] Pharma industry,” she said.

As the current measles outbreak has spread for more than seven months now, vaccination has become a lightning rod within the tight-knit ultra-Orthodox community; all but a handful of people who were sickened did not identify as Orthodox Jewish.

The vast majority of ultra-Orthodox NYC residents immunize their children, much the same as the general population. But a small but organized subset of the community, who have ties to the national anti-vaccination movement, have been organizing and spreading their anti-vaccination message through hotlines, conference calls, pamphlets and on the encrypted messaging service WhatsApp.

New York City Health Commissioner Oxiris Barbot took to Twitter to call out the event, writing, "To hold an anti-vaccination rally in the middle of an outbreak is beyond irresponsible, it is downright dangerous."

Word about Tuesday’s event had spread through WhatsApp groups, word of mouth, flyers stuck to telephone poles and through recorded messages blasted from car speakers around Borough Park.

Other polemic speakers slated to address the crowd included Rabbi Hillel Handler, who in a speech at the recent anti-vaccine symposium in Monsey blamed “illegals,” for spreading disease, and said the focus on measles was a distraction crafted by Mayor Bill de Blasio, whom he called a “sneaky, sneaky fellow,” citing his German heritage.

Rabbi Handler’s messages that the city was targeting Jews instead of other groups seemed to have permeated at least some of the audience members. Heshy Friedman showed up to the event with his own signs that read “Why does the mayor not close down the gay movement that is spreading deadly AIDS but shut down yeshivas for measles that is not deadly?”

“We believe the mayor is harassing the Jewish community because he’s trying to shut our private Jewish schools for just measles...and yet he’s not gonna stop the gays from having their clubs and their parades,” Friedman said, drawing a false, homophobic connection between vaccinations, the AIDS virus, and the gay community. 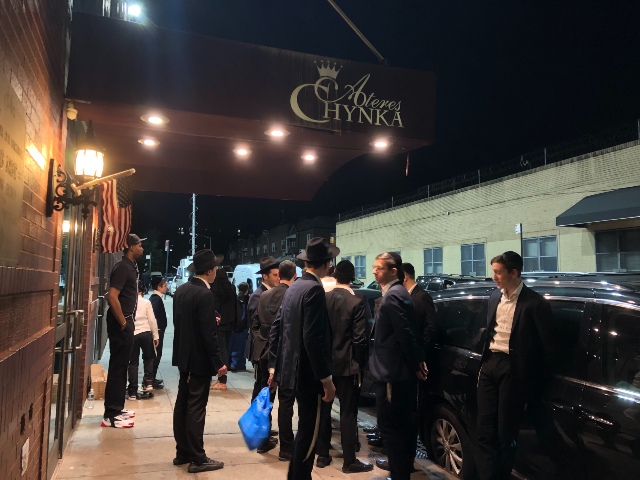 Reporters were barred from entering by security. Staff at the catering hall said organizers of the event had requested 1,300 seats, but according to photos taken by Yeshiva World News and accounts from some attendees, turnout paled in comparison to the earlier event in Monsey, where hundreds showed up.

Since the outbreak began in New York City last October, there have been 566 measles cases and at least 40 hospitalizations, 11 of which were admitted to intensive care. Seventy-three percent of the measles infections were among completely unvaccinated people.

While the current measles outbreak, the largest nationwide since 1992, has sparked conversations about vaccination across many communities, it’s caused particular friction within the ultra-Orthodox Jewish community, where the vast majority of measles cases have occurred.

“This issue is becoming central, in the world and especially in the Jewish community,” said attendee Chasya G., who declined to give her full name. “We’re all obsessed with it, because it’s our children. Not only our children..our rights and freedoms are at stake.”

Members of the ultra-Orthodox community said they’d shifted holiday plans, bar mitzvah invitations specify no unvaccinated kids are allowed in, and vaccination has become a topic of discussion for parents who are finding a suitable marriage match for their children.

“I have a couple of siblings of marriageable age and my parents make sure to ask, at the beginning now, ‘Does your family vaccinate?’” said a woman named Rachel, who lived a few blocks away from the catering hall and came to oppose the event with her toddler Pinny. “We don’t want to deal with problems like that.”

A few young women attending the event said they had intentionally exposed themselves to measles and recently recovered, like 19-year-old Anna who declined to give her last name, who caught the virus from a sick girl she knew.

“She coughed on me three times and then I drank from her cup. Ten days later I developed a fever,” she said. “I was sick for a week..I was the first one to try it in my family. My mother was obviously scared with all this hysteria.”

She went on to expose the rest of her five siblings, who also got sick, she said.

“They’re all immune they can go back to school,” she said. “I believe that God created my body perfect and I don’t need humans to fix my immune system.”

#anti-vax
#anti-vaxxer
#borough park
#brooklyn
#ultra-orthodox
#vaccinations
#original
Do you know the scoop? Comment below or Send us a Tip