Cyclists on the Upper East Side will have to keep fending for themselves. Members of Community Board 8 voted Wednesday night to reject a Department of Transportation proposal that would have installed six new painted bike lanes on crosstown streets throughout the neighborhood.

The plan to install bike lanes on to 70th, 71st, 77th, 78th, 84th, and 85th Streets had been recommended by the Community Board's own transportation committee. Those lanes would have quadrupled the Upper East Side's supply of crosstown bike lanes. Currently, only 90th and 91st Streets have lanes.

Dozens of neighborhood residents showed up for last night's vote, speaking out both in favor and opposition to bike lanes and cyclists in general.

"I've been on this street for 25 years. I chose it because it was a very nice place to live and quiet," Shufro said. "Most of us who live there worked long and hard to acquire the property that we now live in, and to have this come and create traffic jams and horns blowing is just a terrible thing in my standpoint."

Others at the meeting cited ambulances, a post office, and bus routes as reason to keep bike lanes off of 70th and 71st Streets, while 84th and 85th Streets were simply labeled "too congested" by neighborhood resident Wendy Abrams. 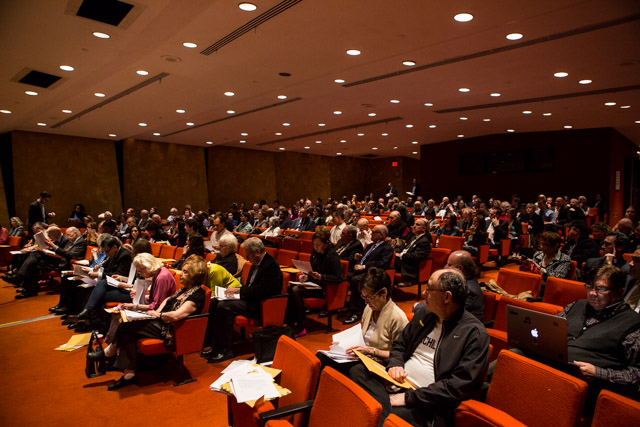 "I'm opposed to the bike lanes. My concern is that for elderly people to try to get into a vehicle in a safe manner, that would be very difficult," Edwina Barbis said. "There's too much congestion, and I think it would really impact the traffic greatly."

Resident Mariana Olszewski spoke to discourage the board from re-adopting plans for bike lanes on East 81st and 82nd Streets—which had been part of the DOT's initial proposal.

"I am a mother at PS6, a school that has over 750 very young children," she said. "When I bring my children to school on 82nd Street, they run and sometimes they go into the street. If you make a proposal for 81st and 82nd Streets, we're putting my little boys and all the kids at PS6 in danger."

Still, many at Wednesday's meeting at the New York Blood Center had hoped to see bike lanes installed.

"In all the communities in which I've worked and lived, I've seen that bike lanes have actually made a big difference in terms of vibrancy. I'm in support of the lanes," Robert Joseph, a UES resident and city planner said. "They add to the cityscape, they make it a safer place...It'll go a long way for the safety of our neighborhood." 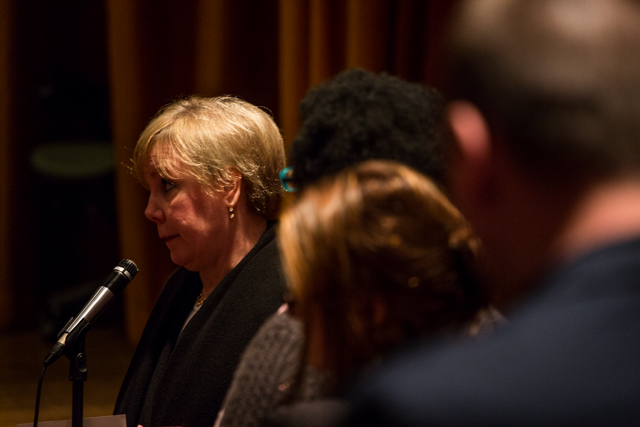 East 96th Street resident, attorney, and cycling advocate Steve Vaccaro was impassioned in his support of the lanes, and claimed the neighborhood's history of cycle-phobia has been repeatedly misplaced. "In 2007 this Community Board opposed the paired crosstown bike lanes on 90th and 91st Streets, with dire predictions it would cause congestion, it would disrupt senior citizen and child activities, that it would present danger to health care facilities and seniors. None of that happened," Vaccaro said during his allotted one minute of speaking time.

"There's nothing special about this neighborhood. We don't have congestion, death or anything like that," he said. Vaccaro argued that motor vehicles, rather than bikes, pose a greater threat to Upper East Side residents.

Recent traffic death statistics support his argument, but his speech still drew scoffs and sniggers from the audience, including some board members themselves.

For nearly two hours, residents lined up to speak. Some held up signed petitions against bike lanes, others recounted personal stories of near run-ins with delivery cyclists, and two children, Joseph and Eileen Fitzpatrick of East 84th Street's Saint Ignatius of Loyola school, begged the board to consider the "negative health impacts" bike lanes would impose on elementary schoolers playing before and after school. 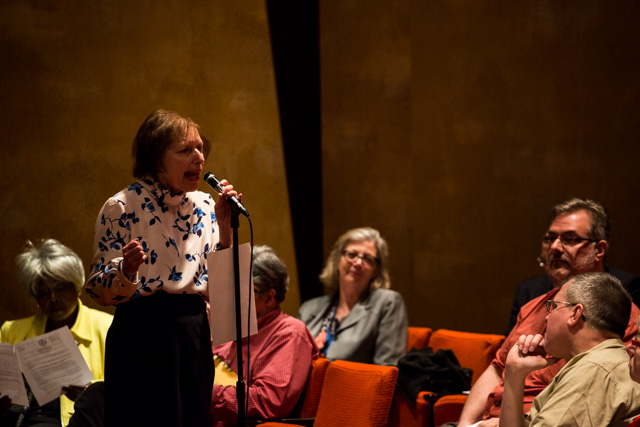 Hindy Schachter, whose husband was killed in a collision with a cyclist, spoke passionately in favor of new bike lanes Wednesday night (Scott Heins/Gothamist

But the night's most moving argument was voiced by Hindy Schachter, whose 75-year-old husband was killed in a collision with a cyclist while he he was jogging in Central Park in 2014. Surprising the room, Schachter delivered a moving speech in support of bike lanes, shouting down mothers in the room who spoke of fear for their children.

"You mothers who are saying you're afraid your children will be hurt in the street—It is extremely rare that children are killed or maimed by cyclists, in lanes or out. If you want to be afraid, it's the cars you should be afraid of."

"We are having an epidemic of collisions," Schacter continued. "How do you get that? You get that by reallocating space. Giving every user the space that they need. The first way to do that are bike lanes. Bike lanes redirect traffic. They let you know where people are. They affirm the legitimacy of cyclists on the road. And when your legitimacy is affirmed, that's when you become more law-abiding."

The room erupted into applause and cheers as Schachter stepped away from the microphone.

When it came time to vote, however, the Community Board appeared unmoved by Schacter's speech, and voted to reject the bike lanes by a vote of 25 to 19, with one abstention.

Following the vote, Vaccaro sighed in disappointment. "I think there are a lot of voices that are being ignored," he said.

Board member Michele Birnbaum voted against the bike lanes, and said he was pleased with the evening. "I'm glad that they were defeated," Birnbaum, who sits on the Board's transportation committee, told Gothamist.

Echoing her previous demands for mandatory licensing and insurance of cyclists, Birnbaum said new cyclist infrastructure on the UES would increase bike usage while enforcement of rule-breakers lags behind. When asked where she expects the push for bike lanes in the neighborhood to go next, Birnbaum smirked. "At this moment, I hope nowhere."

#bike lanes
#bike nyc
#CB 8
#Community Board 8
#upper east side
#vision zero
#original
Do you know the scoop? Comment below or Send us a Tip