An Upper East Side boutique has ignored the lessons of 13 years of ill-advised 9/11 blowout specials and complimentary mini muffins, offering shoppers 20 PERCENT OFF SELECT ITEMS for this HOT SEPTEMBER 11 REMEMBRANCE SALE. 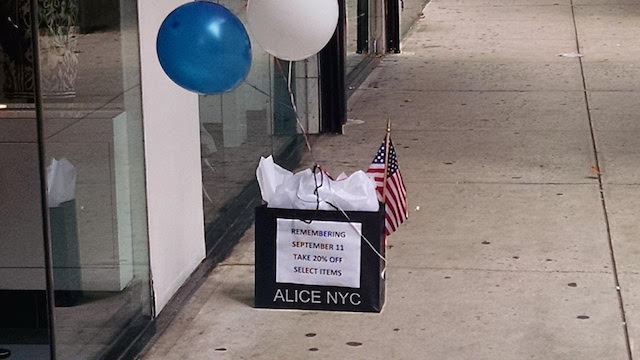 We called Alice NYC with a few inquiries: What algorithm did the shop use to settle on 20 percent? Would 10 percent downplay the pain caused by the death of thousands, but 30 percent, ha, well, let's not be ridiculous, we're not just giving away valuable merchandise here, this isn't Salvation Army. Also, "select items"...?

The agitated woman who answered the phone—presumably the owner—said that the idea for the sale was not hers, but a misguided employee's.

"We're not having a remembrance sale," she said flatly, feigning confused indignation.

I, in turn, explained the photo front of me: The sign? The flag? The balloons? The 20 percent off to honor the most grave terrorist attack in our country's history? Ah, now she remembers:

"One of the guys here said that he'd like to do a remembrance, and I told him 'no.' I brought in a flag out of respect, and I had the flag, and the balloons. But no, we're not having a sale for that. We have a summer sale. I have to go."

Alice NYC is having a sale. It is not a September 11 remembrance sale. It is a summer sale.