UberX—the cheaper alternative to Uber, regular—has announced that it's slashing its prices by 20 percent in New York for some unspecified period of time—a transparent effort to steal riders from yellow cabs, which have remained the more popular option despite Uber's total domination in other cities. Here's an Uber-produced table that explains your savings. My god, the things you can do with those two extra dollars! 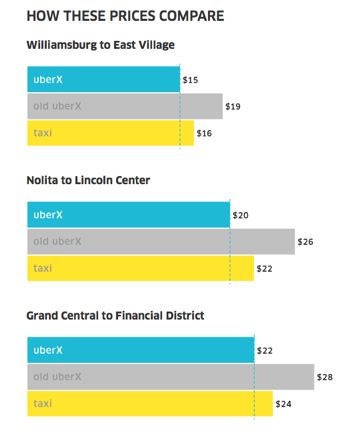 Uber's mercenary tactics are not unique to New York—the company also lowered fares by 25 percent in the Bay Area, where the competition is primarily rival operators like Lyft, not cabs. Still, the company is famously ruthless in its bid for customers, with employees intentionally fucking with Gett by booking and then cancelling rides, to say nothing of the cheap marketing ploys like office kitten delivery.

The price slash was likely made possible by Uber's recent $1.2 billion cash infusion from investors, who value the company at $18.2 billion. Also, Uber notes, "These prices are only in effect for a limited time. The more you ride, the more likely we can keep them this low!"

#cabs
#taxis
#uber
#uberx
Do you know the scoop? Comment below or Send us a Tip