The wife of a Brooklyn Uber driver is suing the company after the couple allegedly discovered that UberX is systematically overcharging riders.

The class-action lawsuit was filed on Wednesday in Brooklyn federal court. The suit alleges that since 2016, when Uber implemented upfront pricing for UberX, showing riders their fare in advance, the rideshare giant has been charging riders one fare, basing drivers' pay on a lower fare, and pocketing the difference. The named plaintiff, Jacqueline Gayed, discovered the alleged fraud by comparing notes with her husband, an Uber driver named Mohammed, according to the suit. Over the course of repeat tests, the two reported consistently finding fare discrepancies between their respective accounts. The differences were in the neighborhood of $1-$4 for each trip.

The suit notes that other drivers have spotted the same issue, and cites an analysis of a month of one driver's UberX data by the blog The Rideshare Guy. The blog's data showed that Uber overcharged riders by $162.56 over the course of 82 UberX rides that month, an average of $1.98 per ride.

Uber made the alleged grift harder to detect by—at the time it implemented upfront fares—ceasing UberX drivers' ability to contact riders directly post-ride, and delaying the fare details from appearing on the drivers' end, according to the suit.

The filing estimates that, if half the 250,000 trips made per day in New York City using e-hail apps are UberX rides, and passengers are being overcharged $1.98 per trip, the company is stealing $247,500 per day in New York alone. The Uber platform allegedly justifies the fare differential internally by charging passengers up front based on roundabout routes, and basing drivers' fares on more direct routes. 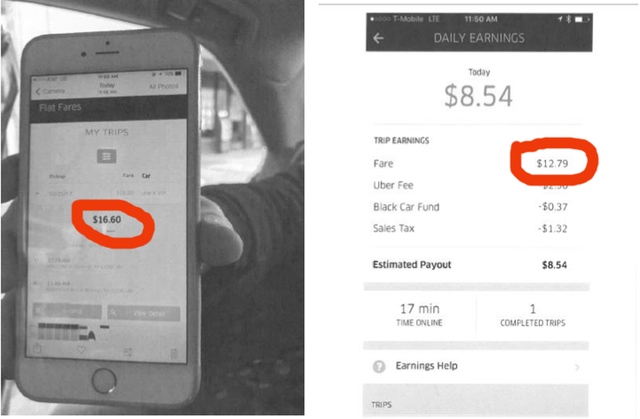 Images purportedly showing Jacqueline Gayed's fare as a passenger, left, and the fare recorded in her driver husband's account for the same ride. (Catherine E. Anderson)

The accusations are the latest in a long line of charges against the e-hail company. Just this week, the company agreed to pay New York drivers back $900 each on average for millions of dollars of wages withheld from tens of thousands of drivers since 2014. The company said that an accounting error led it to base its share of fares from a formula that included state taxes, as opposed to pretax fares, in violation of its contract.

Separately, the New York Times reports that the company may be deducting state taxes from drivers' portion of fares instead of charging them to passengers, as is required by New York law. The paper wrote that the practice may have cost drivers hundreds of millions of dollars. Uber is lobbying the state legislature to roll back the state taxes on livery cabs.

Uber CEO Travis Kalanick is also under fire for his personal behavior, and for an allegedly sexist office environment extending throughout the top levels of the company.

A video released in February shows Kalanick arguing with an Uber driver over Kalanick's decision to slash fares. Kalanick closed the discussion by whining, "Some people don't like to take responsibility for their own shit. They blame everything in their life on somebody else. Good luck!"

Also in February, a former Uber engineer shared her story of being propositioned by her manager. When she complained to human resources, the department and upper management allegedly protected the manager because he "was a high performer."

The following month, Kalanick's ex-girlfriend, professional violinist Gabi Holzwarth, told The Information that in 2014 she accompanied Kalanick and five Uber employees to an escort bar in Seoul. When another female employee complained to HR about the incident, executives allegedly tried to shut her up.