Uber's CEO Is Being Sued For Price-Fixing

Travis Kalanick, founder and Chief Executive Officer of Uber, really didn't want to deal with a lawsuit brought against him by one angry former customer: for the past three months, his lawyers have been trying to get the judge to drop the case, which claims that Uber's pricing algorithm violates antitrust laws. But yesterday, Manhattan judge Jed Rakoff ruled that he won't dismiss the suit, which is seeking class-action status on behalf of anyone in the country who's ever used Uber and/or been subject to surge pricing.

"The advancement of technological means for the orchestration of large-scale price-fixing conspiracies need not leave antitrust law behind," Rakoff wrote in his ruling, adding, "The fact that Uber goes to such great lengths to portray itself—one might even say disguise itself—as the mere purveyor of an 'app' cannot shield it from the consequences of it operating as much more."

Spencer Meyer, a Connecticut resident, filed suit in December 2015, claiming that "Uber has a simple but illegal business plan: to fix prices among competitors and take a cut of the profits. Kalanick is the proud architect of that business plan." His lawyers argue that because Uber's drivers are all technically independent contractors and therefore competitors, using the app's pricing algorithm makes them complicit in an antitrust conspiracy organized by Kalanick. They also allege that surge pricing "artificially manipulates supply and demand, guaranteeing sharply higher fares for drivers who would otherwise compete against one another on price."

Referencing reports that Uber drivers manipulate the app to create a false lack of supply and trigger surge pricing, the suit accuses Uber of encouraging drivers to log out of the app to show less supply, and alleges that some drivers stay offline during non-surge times to trigger a surge.

Meyer's suit also suggests that Uber has a near-monopoly over the rideshare economy as a whole: it cites leaked data revealing just how the app is in comparison to Lyft, its main New York competitor, and claims that Sidecar left the market in part because of Uber's dominance. 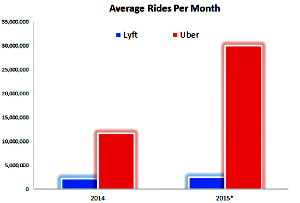 Uber itself, valued at more than $60 billion, isn't named in the suit: Kalanick is the sole defendant.

"This case is about price competition, plain and simple," said Andrew Schmidt, one of Meyer's attorneys. "[Yesterday's] decision confirms that apps are not exempt from the antitrust laws."

An Uber spokesperson said that Uber disagrees with the judge's ruling, and said that "these claims are unwarranted and have no basis in fact. In just five years since its founding, Uber has increased competition, lowered prices, and improved service."

This is hardly the first time Uber has come under fire for surge pricing: in 2014, Attorney General Eric Schneiderman said that surge pricing during emergencies amounted to price gouging, and the app had to agree to cap fares under such circumstances. And a Brooklyn City Council member has put forward legislation that would ban the app from raising fares more than 100 percent, whereas currently, they can go as high as 900 percent when surge pricing gets really bad. The app is also facing a class-action lawsuit in California that's looking to have drivers classified as employees, not independent contractors.

It's worth noting that all customers using the app have to agree to surge pricing and type in the surge amount before hailing a ride—but that doesn't tend to stop people from complaining about sky-high charges after the fact.

This case is scheduled to go to trial this November.

#capitalism
#lawsuit
#price-fixing
#surge pricing
#uber
Do you know the scoop? Comment below or Send us a Tip