A mass e-mail sent to new Uber drivers in New York City late last fall encouraged those drivers to "position" themselves in the "busiest areas of the city"—Manhattan below the north end of Central Park, plus a swath of Brooklyn from Greenpoint south to Park Slope—if they hoped to receive a "guaranteed" $5,000 for their first full month of driving.

The e-mail states: "If you are found avoiding busy areas, you will not be eligible for the guarantee." 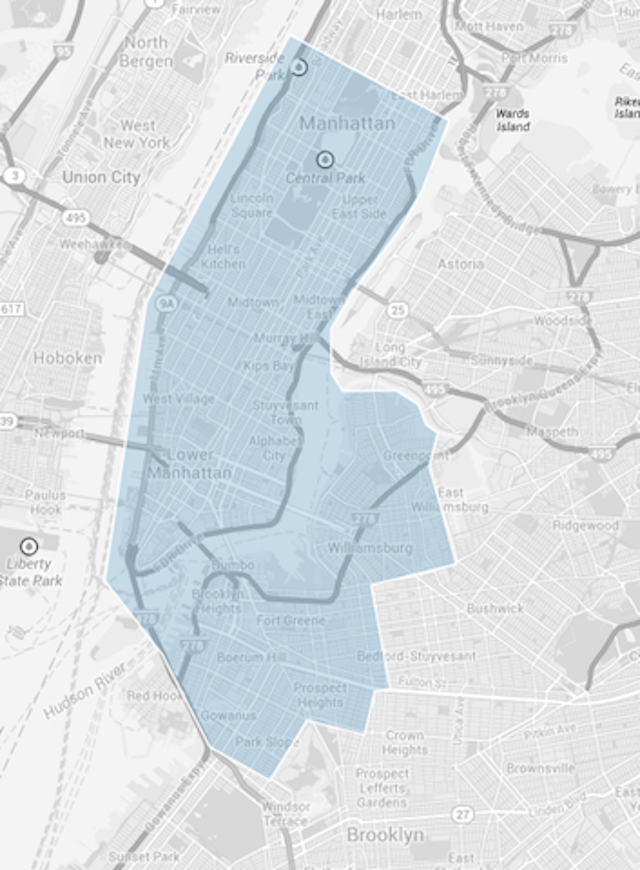 Map presented to new Uber drivers last December, incentivizing them to "position" themselves in the highlighted areas (via Uber)

An Uber spokesperson confirmed that this particular incentive was only in place between October and December of last year. But the Mayor's office counters that, regardless, the incentive (which was also published on Uber's website, and is still outlined on the app's Newsroom page) contradicts the message that Uber has been sending in recent weeks—that Uber fills a void in the outer boroughs, where taxis "often refuse people in minority neighborhoods."

De Blasio spokesman Wiley Norvell said of the incentive, "It takes some serious duplicity to run millions of dollars in ads talking about a five borough city, while pushing and paying drivers to spend all their time in lower Manhattan and a small fraction of Brooklyn." He added, "This multi-billion dollar corporation is not being straight with New Yorkers. Far from solving inequities, these practices just augment them." Norvell also pointed out that the three month incentive period encompassed several of New York's official gridlock alert days, when the DOT encourages New Yorkers to take public transit and avoid driving in Manhattan.

Here is an Uber spokesman's cheeky response to the Mayor's office, in full:

"Last time I checked, Hell's Kitchen to East Harlem was not 'lower Manhattan' and Park Slope to Greenpoint was not just a small fraction of Brooklyn. This was a short-term incentive to meet high demand during the holiday season and has not been in effect anytime this year. During the short time it was in place, reliable rides were still readily available in the outer boroughs."

Included in Uber's map of "busiest areas" is Manhattan's Central Business District below 60th Street, which has been central to the TLC and DOT's argument in favor of capping the growth of for-hire vehicles (FHVs) until next April. At a City Council hearing last month, the TLC and DOT pointed out that since 2011, the number of licensed FHVs in the city has jumped 66% from 25,000 to 63,000—specifically in the already-congested Manhattan CBD where, according to DOT data, 72% of FHV pickups take place.

Under the proposed legislation, which will likely go to a vote on Thursday, Uber would only be allowed to add 200 additional drivers to its platform between now and April 2016.

Meanwhile, Uber has argued vehemently that their drivers do not contribute to congestion in Manhattan's busiest corridors. Instead, they posit that de Blasio is acting under pressure from taxi barons. (Bloomberg News reports that de Blasio received over $500,000 in campaign donations in 2013 for his mayoral campaign from the "traditional taxi and limousine industry.")

In an interview with Fusion earlier this week, Uber's New York GM Josh Mohrer stressed that "Uber encourages the use of mass transit (especially in the outer boroughs) by providing a 'last mile' link to the subway." Interestingly, Mohrer frets that the cap will result in the same Manhattan-centric strategy Uber implemented last fall. In this context, it's used as a threat: "If you supply-constrain Uber, it too will eventually become unreliable. Vehicles will focus on the high end in midtown Manhattan, rather than the outer boroughs," he said.

And this morning, to make its "we don't add to congestion" argument even more explicit, Uber shared its usage data from June 1st through July 19th. The data shows that although there are 20,448 registered Ubers in New York City (compared to 13,587 licensed yellow cabs and 8,043 green cabs), on average, in the last month and a half, only 1,904 of them were on the road in Manhattan below 59th Street, between 7:00 a.m. and 7:00 p.m.

In a statement accompanying these numbers, Mohrer accused de Blasio of withholding information. "For months, we have provided the de Blasio administration with data that shows this exact same trend," he said. "Yet apparently the Mayor's approach was to hide this data from the public and blame Manhattan's congestion on Uber even when his own facts show the exact opposite."

Uber also loves to point out that, according to the 2014 Taxi Cab Fact Book, 94% of yellow cab rides originate in Manhattan, or at one of the city's airports.

Brooklyn Borough President Eric Adams spoke out against the Uber cap yesterday, on the grounds that the app serves minority communities in the outer boroughs. "One of the biggest struggles I had was the fact that many people who were in the yellow cab industry were too yellow to come to Brooklyn," he told reporters, at an Uber job fair in Long Island City. "Many of you... provided a service that was absent to many people who lived in the outer boroughs. Your story is the American Dream."

This afternoon, several advocacy groups, including New York Communities for Change, Make the Road New York, and the Black Institute, will rally outside of City Hall, on the grounds that "Uber's mostly white male leadership is spreading illogical assertions that legislation to cap for-hire-vehicles will affect underserved outer-boroughs and communities of color."

UPDATE: An Uber spokeswoman has shared a few examples of recent Uber-driver incentives that did not apply to Manhattan/Yuppie Brooklyn.

On April 17th Uber launched a five-weekend incentive, "guaranteeing" all UberPOOL drivers $50 per hour between 10:00 p.m. and 2:00 a.m. on Fridays and Saturdays (so long as the drivers completed at least one trip per hour). This, because "Demand will be VERY HIGH... due to the uberPOOL promotion along the L train in Williamsburg, Bushwick, and Manhattan." (Granted, the L line is not exactly off the beaten yuppie path.)

And last weekend, Uber incentivized pickups in Staten Island. From a notice sent to drivers:

This weekend, complete any number of trips starting in Staten Island and receive a $15 reward per trip with no limit! Applicable for all trips completed from Friday July 17th 11:59PM until Sunday July 19th 11:59PM.

Also this morning, Governor Cuomo reiterated that he does not support the cap, speculating that a cap in New York City would compel Uber drivers in other counties to flood the boroughs. From Capital:

“Wouldn't that just cause the Uber franchises to go to Nassau, and Westchester, and Suffolk, and set up their Uber franchises there and drive into the city?... I think it's much more complicated than we think, and I don't think that is going to accomplish the goal, and it could have statewide ramifications, and that's why I want to get to the speaker and urge deliberation here.”

However, de Blasio spokesman Wiley Norvell pointed out that it is in fact illegal for any vehicle not registered by the TLC to make point-to-point trips within the city. He responded with fire:

"Licensed for-hire vehicles from Nassau and Westchester can only either drop off or pick up a rider in New York City as part of a trip outside the city. The issues here are serious for our city—protecting workers and passengers, fair service for people with disabilities, supporting public transit, addressing rising congestion. No one should be manufacturing pretexts for avoiding those pressing issues.”

de Blasio spokesman Wiley Norvell says Cuomo is "mistaken" in his claim that a cap would drive Ubers to surrounding counties.

#dot
#sharing economy
#tlc
#traffic
#uber
Do you know the scoop? Comment below or Send us a Tip