Uber Gets Off Easy In City's Long-Awaited Traffic Study

In early July, the City Council raised alarms that the For Hire Vehicle industry, made up of taxi-alternatives like Uber and Lyft, had grown 66% since 2011. Councilmembers argued that FHVs were increasing congestion in the busiest sections of Manhattan, and demanded a study of their impact accompanied by a strict growth cap until the summer of 2016.

Initially, Mayor de Blasio jumped on board to challenge the company, which was recently valued at $62.5 billion. "Our goal is to ensure that our streets aren't flooded with tens of thousands more cars before we can stand up new rules to govern the marketplace," he wrote in an op-ed for the Daily News.

Uber, undeterred, launched an elaborate smear campaign, enlisting drivers, politicians, community leaders of color, and its own corporate employees to protest the impending cap. De Blasio was on the brink of "destroying" 10,000 potential jobs, they warned. The app even updated its interface to embarrass the mayor.

De Blasio made an about-face in late July, the day before the Council was expected to vote on the cap legislation. The vote was postponed indefinitely, the cap was scrapped. As if to console his critics, the mayor announced a four-month, $2 million congestion study of how FHVs impact the city.

If completed on time, the results of that four-month study would have been making the rounds back in November. This week, both the NY Times and Wall Street Journal reported that the City was biding its time, framing its findings to prevent another Uber "showdown."

Now the results are in [PDF], and the verdict is far from damning for Uber. In fact, the study states explicitly that it does not recommend an imposed growth cap on FHVs. Rather, it calls on the City to prohibit predatory (a.k.a. surge) pricing; apply an MTA surcharge to Uber and other apps to mirror that leveraged by taxi trips; and insure handicap accessibility in FHVs. 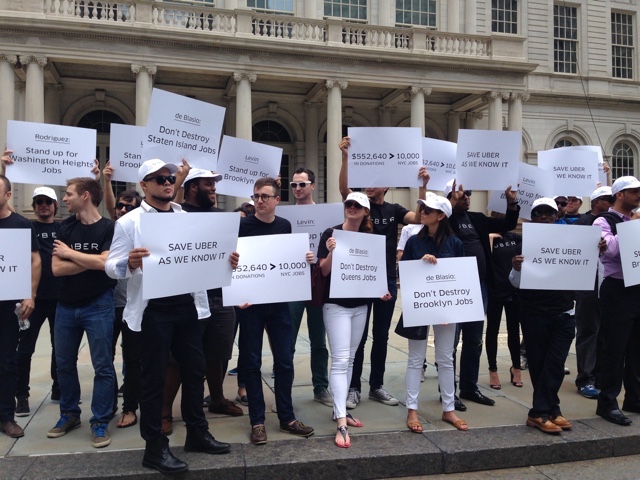 Uber employees protesting an Uber cap on the steps of City Hall in July (Emma Whitford/Gothamist).

But the report states that while ride-hailing apps are "a contributor to overall congestion" in downtown Manhattan, services like Uber and Lyft "did not drive the recent increase in congestion." According to the study, this is because Uber trips tend to replace taxi trips, rather than compete with them (more than 1,200 drivers have moved from yellow cabs to Uber in the first half of 2015). Lane blockage from construction sites and delivery trucks are also deemed factors, as well as a steady increasing in city-wide population.

Bhairavi Desai, who runs the New York Taxi Workers Alliance, is incredulous. "It’s ludicrous to think that the new vehicles haven’t added congestion," she said in a statement to Politico. "I don't know what hours they did this study. Was it not during rush hour or something?"

The study also found that FHVs won't have a detrimental impact on air quality in the coming years, in part because of increasingly-strict auto emission standards.

Overall, the increase in congestion due to FHVs in the coming years is predicted to be "modest." In the meantime, the study posits that the City should take other measures to reduce congestion and increase safety on city streets—it should crack down on idling, double parking, and cross-walk blocking for example, and improve the speed and reliability of city buses.

Independent of the Mayor's efforts, a group of City Council members led by Transportation Committee Chair Ydanis Rodriguez conducted their own investigation into the FHV industry, and announced a handful of bills minutes before the City released its long-awaited study this afternoon.

"The Council is proud to take the lead on reforming the taxi and for-hire vehicles in New York City," said Speaker Melissa Mark-Viverito in a statement. But even though the Council once touted that it had the necessary votes to impose a cap on Uber, there's no mention of a cap in their legislation, either.

"We appreciate the thoughtful process Mayor de Blasio and his administration have engaged in over the last several months to improve the commercial car industry," said Josh Mohrer, Uber New York General Manager, in a statement. "We are supportive of several of the proposals presented today."

Paul Steely White of Transportation Alternatives said that the report's proposed crackdown on unsafe driving practices like idling was "one of the most significant reform suggestions to come out of this report," adding, "any reform package that doesn't include a consideration of how to manage congestion moving forward is not comprehensive."

An initial review of the new City Council legislation was less heartening. "Notably absent are any safety-related reforms, and that's disturbing," Steely-White said. "We know that FHVs set the tone on our streets."

#congestion
#tlc
#uber
Do you know the scoop? Comment below or Send us a Tip