Hundreds of Uber drivers are expected to turn off their apps today for a one-day strike against Uber's Friday decision to slash UberX fares by 15% city-wide.

At a protest by Uber divers against rate decreases in Long Island City. pic.twitter.com/jEPpDFKYYE

According to the company, which was recently valued at $62.5 billion, the motivation for the fare reduction is to decrease idling time for drivers who tend to experience a lag in trips after the onslaught of holiday tourists dies down. According to Uber, in 2012 Uber drivers in NYC carried passengers an average 16 minutes per hour. Now drivers are on the clock 32 minutes per hour, and hourly earnings have increased 33%. Uber credits this to its decision to cut fares in summer of 2014.

But many Uber drivers have already balked at the new pricing scale, arguing that they have not seen an increase in earnings during the first three days of the new pay-scale system. In a Facebook event page promoting today's rally, driver Farrukh Khamdamov created a poll asking drivers if they had seen higher earnings since Friday. As of this morning, 229 respondents reported they had not, compared to 7 who had.

Khamdamov is a student at Manhattan Community College, studying business administration. He drove last Saturday, and took home $224.60 in six hours. Of that total, $70.88 was earned in surge pricing. Khamdamov says that on an average Saturday under the old fare system, he would take home at least $300. Worse than the fare cut, he said, was the hustle required to get close to his usual take-home.

"On one trip I drove five minutes, one mile, and made $4.89," he said. "Take away gas money, and that comes to $4. There were a lot of short rides because people knew it was cheap, so they took the Uber two blocks." 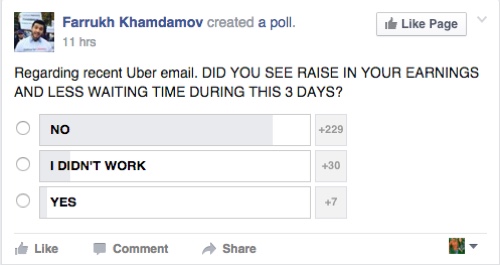 "Uber is running on a nasty planned program to monopolize the market and destroy Via and Lyft and other app companies and the DRIVERS have to pay the price," wrote driver Mounir Badri on Facebook. "Uber completely don't care about you and your living."

The organizers of today's strike encouraged drivers to unite, and not take advantage of the potential reduced driver pool to have a lucrative day on the job. "Stop being a slave, boycott new UBER price cut," the organizers wrote. "Tell your friends, we are organizing strike to return respect and power to drivers... Don't be greedy and take advantage of others who are not working! We are powerful when we are united!!!"

Today's demands, which the drivers would like to see instated within 30 days, include increased fares by 15%, the addition of tip options from 5-20%, and a reduction of Uber's commission on all trips to 10%. Depending on when they signed up for the service, drivers currently give 20-25% of each fare back to Uber.

Posting on the event page around 4:00 a.m. on Monday, driver Rashel Sarwar wrote that he had just returned from Manhattan, where he saw many drivers still out on the road.

Driver Mamdouh Ramadan responded, "Some stuck with car payment and rent... we understand." Indeed, Uber drivers are responsible for car rental fees, or insurance and car payments if they own the cars they drive on the job.

In response to driver concerns, Uber corporate released initial data on fare impact on Monday, comparing this past weekend to two weekends ago (last weekend the service was shut down due to blizzard conditions). According to Uber, drivers spent 39% less time without a fare last weekend, and saw a 20% increase in hourly earnings. An Uber spokesman also noted that trips in Queens increased by 22%, an all-time record.

"We expect this positive trend to continue, but if for any reason the price cuts are not giving drivers more business and better earnings, we will consider changing them," said spokesman Matt Wing in a statement. "We are offering to meet individually with every driver who wants to discuss their concerns and review their earnings to show how we think this is helping their business."

"Uber doesn't show us real numbers," Khamdamov said. "They don't talk to drivers, they just come out with statistics."

"They want to pit drivers against each other, and in this race to the bottom, no driver wins," said Alliance Executive Director Bhairavi Desai in a statement. "It's only Uber that would be looking to increase its profits, and it's doing it at the expense of hard-working people."

Uber drivers are scheduled to protest at noon today, in front of Uber's Long Island City headquarters at 27-55 Jackson Avenue.

#drivers
#fares
#strike
#uber
Do you know the scoop? Comment below or Send us a Tip