Two co-workers at a Manhattan-based PR firm say their Uber driver sped them through a closed entrance to the Lincoln Tunnel early Thursday morning en route to Hoboken, narrowly missing a construction vehicle parked in his path. Port Authority officials waiting for the Uber on the far side of the tunnel allegedly determined that the driver was "on something."

Cori, 24, and Jeff, 23, say they had been out drinking at bars near Madison Square Garden on Wednesday night, and decided to call for an UberX home around 12:45 a.m. The ride was uneventful until their driver, identified on their receipt as a man named Forhad, passed by the New Jersey-bound entrance to the Lincoln Tunnel and on into a closed lane, speeding past construction workers to the New Jersey side.

"He was heading towards the Lincoln Tunnel, and he drove past the entrance," said Cori, who spoke on condition that her last name be withheld. "I think he realized that and tried to back up, but he obviously couldn't back up all the way because there were cars going into the correct entrance to the tunnel."

According to Cori and Jeff, the driver proceeded to drive over the divider separating the right and center tunnel entrances, past a "huge" Do Not Enter sign and beneath the red X's at the peak of the tunnel entrance that indicate a closed lane. They estimate that he was driving between 50 and 55 miles per hour.

Before entering the tunnel, Cori says that she heard police sirens behind her. "I guess [that officer] made a call, because when we got out of the tunnel there was ten to fifteen cop cars shining their lights, waiting," she said.

Officers "screamed" at the driver to turn off the engine, and exit the vehicle with his hands up. They proceeded to do multiple DUI tests, including walking in a straight line, and the pen test. 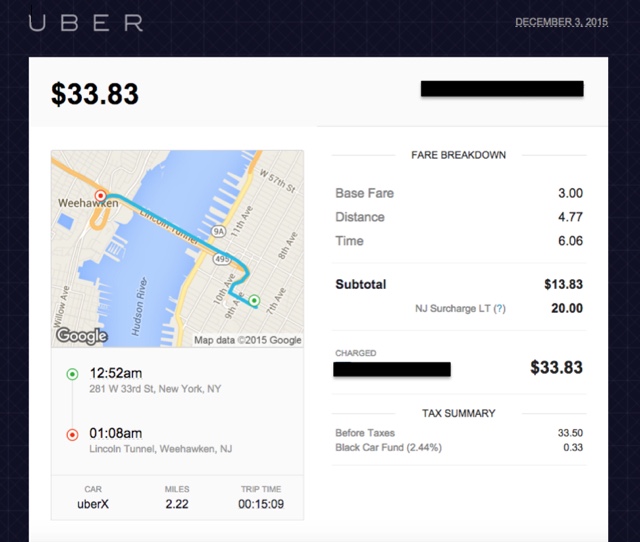 The receipt for the Lincoln Tunnel trip.

Cori and Jeff say the officers ended up driving them the remaining fifteen minutes to Hoboken, but not before questioning them about the driver's condition, and even offering them some advice for the future.

"The cops kind of scolded us for using Uber," Cori said. "They were like, 'you know you guys shouldn't be using Uber. They've been molesting a lot of women lately and robbing houses.' They were like, you shouldn't use Uber anymore. You should use taxis."

The driver, meanwhile, expressed concern about his rating. "He turned to us and was like, 'Hey please don't write a bad review for me.' And we were just like, you have to be kidding," Jeff said.

Still, Jeff and Cori say that they're probably going to keep using Uber—if not in Manhattan, at least in Hoboken. "I'm a little terrified after the experience," Cori said. "I'll use it in Hoboken though. I rarely use it in Manhattan. I usually get a taxi."

Jeff ultimately received a $33.38 charge for a trip that ended ignominiously at the New Jersey entrance to the Lincoln Tunnel.

Reached for comment, Uber confirmed that the passengers had not filed a complaint about the incident. They said they would look into the incident, but did not have an immediate comment.

Obviously this is disappointing to us and is not the type of experience we would want anyone to have with Uber. We have provided the rider with a full refund, and we will reeducate the driver on our expectations... before he is able to access Uber again.