U. Of Hartford Student Charged With Hate Crime After Allegedly Putting Bodily Fluids On Roommate's Belongings

A University of Hartford first-year student was expelled and arrested on Saturday for harassing her roommate, after allegedly admitting that "she licked her roommate’s dining utensils and smeared bodily fluid on the woman’s backpack."

Brianna Brochu, 18, was charged with intimidation based on bigotry or bias, as well as breach of peace and criminal mischief, according to the Hartford Courant.

Brochu is white; the victim, Chennel Rowe, is African-American. This morning, university president Greg Woodward said in a letter, "I am writing to provide further updates on the deeply disturbing situation involving our students. As of this morning, Brianna Brochu is no longer a student at the University of Hartford. She will not be returning to the institution."

Rowe told FOX 61, "I kind of felt unwanted and she was giving off vibes," and said that Brochu ignored her since they were placed in the dorm room together. She apparently became suspicious when she was suffering "severe throat pain." Eventually, she moved out of the room. From FOX 61:

“[Brochu] asked me if I was moving out and I simply said ‘yup’ and she made a face and said ‘okay’ and then I saw her pick up her phone and automatically start texting,” said Rowe.

Minutes later, Rowe was approached by one of her RA’s who informed her of something disturbing: pictures on Instagram, allegedly posted by her roommate, taunting Rowe.

“Rubbing bloody tampons on my things, so like she posted pictures of my Steve Madden bag that I had been sleeping next to the whole time on my bed with blood stains on it,” Rowe said.

The Tab published an Instagram caption that Brochu reportedly posted, proclaiming, "Finally did it yo girl got rid of her roommate!! After 1 1/12 month of spitting in her coconut oil, putting moldy clam dip in her lotions, rubbing used tampons on her backpack, putting her toothbrush places where the sun doesn't shine and so much more I can finally say goodbye Jamaican Barbie." 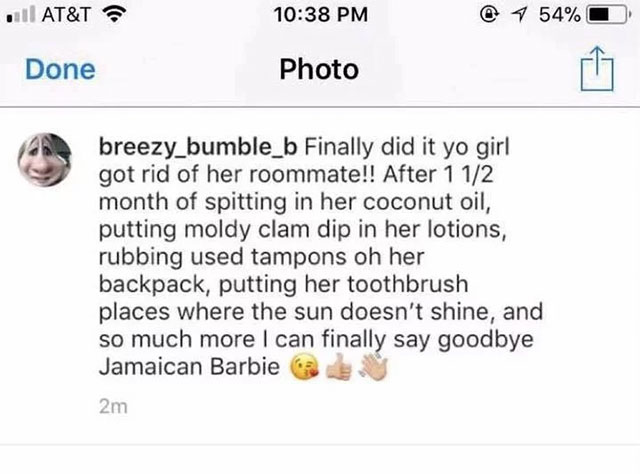 Rowe described her experience on Facebook Live, calling it "beyond ridiculous." She also said that residence hall administrators told her to abide by a "no contact" contract and not to speak about the incident at all:

"I refuse to be another college statistic," Rowe said, in explaining why she was coming forward.

Woodward said in his letter, "As I said yesterday, the University took action immediately once these allegations were brought to our attention. University Public Safety was first notified and responded to this incident at 11:48 p.m. on October 17. The reprehensible conduct of the involved student was not known by the victim or the University until that time. By 1:12 a.m. the West Hartford Police Department was notified and processes for legal and University conduct began. A no-contact order was put into place and the case was turned over to local authorities by 2:16 a.m."

#briana brochu
#chennel rowe
#harassment
#hate crime
#university of hartford
Do you know the scoop? Comment below or Send us a Tip
A new Gothamist is coming! We’ve moved comments over to our beta site. Click here to join the conversation and get a preview of our new website.