TWU: MTA's "Not Gonna Save Anybody" From Dying On The Tracks

TWU Local 100 has really stepped up their public campaigns in recent months to encourage the MTA to make big changes to curb the amount of subway fatalities. Between their graphic flyer campaign and their bloody Metrocards, they've brought a lot of attention to the changes they want—most prominently, they want engineers to slow trains down from 35 MPH to 10 MPH when entering stations. Members of TWU testified during last Thursday's emergency Transportation Commission hearing about subway deaths, and they spared no feelings: "Everything else the Transit Authority has come here and told you is obfuscation and pie-in-the-sky," said TWU Vice President Kevin Harrington. "They're not gonna save anybody. They walked out of here with no plan to stop anybody from dying this week, next week, or next year."

Harrington, an Irish-American Sikh who has been a train operator for 28 years, testified that he has had 10 incidents in which people either fell or were shoved into his train—and the only thing that prevented most of those people from dying was his ability to slow the train down. "I'm tired of the hundreds of [co-workers] I have to deal with every year who are traumatized by having passengers killed or almost killed by their trains," he said. "It's just outrageous that [the MTA] just came here, sat here and told you in so many technical words, with a wonderful presentation, 'We ain't doing anything.'"

During their presentation, the MTA politely shot down several ideas that have been proposed in recent weeks, including platform doors (too expensive and problematic to install), intrusion sensors (not happening anytime soon), trains slowing down to enter stations (too much congestion on platforms), and more MTA employees in stations (not in the budget). In the end, they laid out two strategies to their "concentrated attack": an education campaign (more posters, literature, announcements, TV ads) and "Help Points," which will allow people on the platform to hit a button to alert authorities about emergencies.

The MTA spent much of that presentation explaining why slowing down trains coming into stations would be disastrous: "We're still going to have the overcrowding issues, still have problems with sequencing of trains, it's going to create tremendous running times and inconvenience for our customers," explained Carmen Bianco, the MTA's Senior Vice President for Subways. "This is not something that is feasible for us to do at this time."

TWU Local 100 President John Samuelsson refuted the MTA's insistence that train cars are being used to capacity, that there are no more in the arsenal that could be deployed to ease some of that overcrowding that might arise from slowing down:

The truth of the matter is, they have the ability to add capacity in rush hour situations. That's an economic choice on their part, and a political choice on their part. They can do it. The question for them becomes: is it worth adding capacity to save three [subway] incidents a week. And to save an avalanche of fatalities over the course of a year? So the question for the company is, do we add service, and stop the daily game of Russian Roulette on the station platforms, with folks getting killed on the platforms, or do we add capacity to stop the deaths?

The company is putting an emphasis on not increasing service, and as a consequence we are seeing death on the train tracks. And we are saying, 'slow the trains down, here's some immediate solid proposals we're putting forth that will begin almost immediately to have a positive effect on reducing fatalities.' 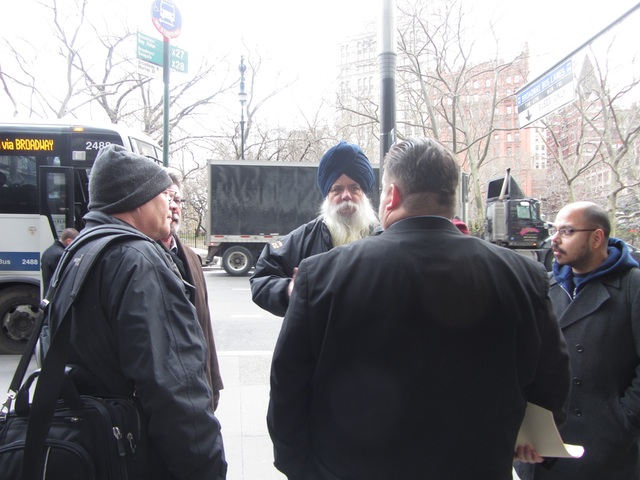 Harrington after the meeting (Sophie Kleeman/Gothamist)

Harrington agreed with his assessment, and after the meeting, he went into more detail about the perception of data with these incidents. If you look at the stats around subway fatalities and incidents, NYC has averaged three incidents a week, and one death a week, for most of the last decade. Ridership has gone up dramatically in that time—so the perception that there are more deaths happening now is false. However, he argued that doesn't change the fact that three incidents a week was too much ten years ago, let alone now. The problem was always there—and he thinks always being ignored by the MTA.

"We're trying to snap the Transit Authority out of their unconscious state about it, from just ignoring it," Harrington told us. And after this meeting, he's convinced that the only way change can come is through pressure from straphangers: "It's going to have to come from the riders, because the Transit Authority is inured to doing anything by years of ignoring the issue. They dont think it's an issue. They're just stonewalling until it goes away."

At the same time, Harrington agreed that the new "Help Points" were an improvement, an imperfect-but-useful tool that could help (assuming someone is on the platform at the time someone falls). As for the idea that the MTA has turned a blind eye to the problems on the tracks, Samuelsson said it was a reflection of their disconnect from the city, and the people who rely on the subway system:

The truth of the matter is that if you take a look at folks on the MTA board, their wives and their children and their husbands are not riding this system day-in day-out. They live in the suburbs, they send their kids to private school. They're not riding the system every day. Their mothers are not getting on this system every day to go to the doctor or go to the store, standing close to the edge of the platform so she can get a seat on an overcrowded train, and running the risk of getting booted into the railroad track, whether purposefully or accidentally. These are folks that need to get in touch with what it's like to be a worker in the city of New York, and try to raise a family in the city of NY, and use this system to do it. They're out of touch with that.

Outside the meeting, Alan Saly, director of publications for TWU, was carrying a scythe (there was also someone there fully dressed as the Grim Reaper). He said he didn't think the MTA would make any changes unless Gov. Andrew Cuomo pressured them to. As for what's next for the TWU, he told us: “We're gonna see how the campaign plays out. It's a funny situation. We don't want to see more people die, but if they do, if obviously that will create more scrutiny—that's how things are in the big city. Bad things happen and then the lawmakers suddenly sort of stand up and say, well, 'Now we're gonna do something.'” 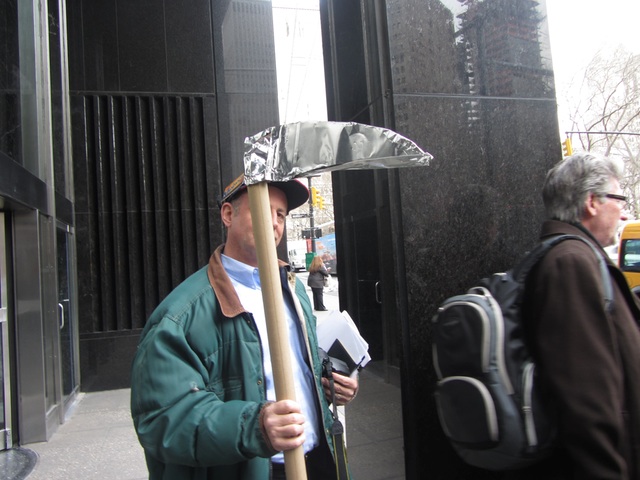