Nearly two and a half years after the sexual assault of a sleeping woman on the subway was captured on video, police have finally made an arrest.

The assault occurred around 4 a.m. on Saturday, October 20, 2012, when Elisa Lopez fell asleep on a downtown 4 train near Lexington Avenue and 42nd Street and awoke to a man resting one hand on her leg and the other on her face as he attempted to kiss her. Lopez punched him and fled.

In December, Lopez told Cosmo that she wasn't aware of the extent of the assault until a friend sent her the video: "I was in disbelief. This can't be me. I felt sick to my stomach. I was yelling, screaming. I was hysterical."

According to the criminal complaint against Chuva, he was shown a still photo of the video and admitted to investigators, "That is me." An NYPD spokesman declined to comment on how Chuva was identified and eventually arrested.

Debjani Roy, the deputy director of Hollaback, a group dedicated to ending street harassment and sexual assault, says that instead of filming the assault and posting it to social media, witnesses should distract the assailant, immediately inform the authorities, or directly intervene.

"By putting up a video to social media, that person's sexual assault is there for everyone to see. Her trauma and her assault, anyone can see it with a Google search, and that ruins people's lives," Roy says. 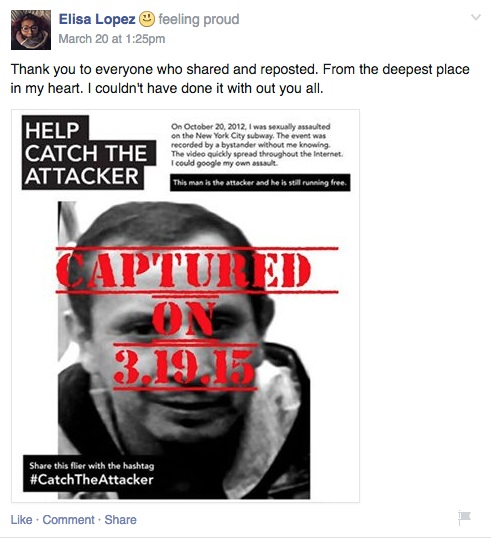 Lopez, a 23-year-old former member of the Air National Guard, told us that she's currently studying to be an art therapist, and urged anyone who witnesses sexual assault in public to act instead of pulling out their cameras to record.

"It's not gonna kill you to say, 'Hey, you alright? You good?' " she said. "People don't really think about what happens to that person in the video, they're there for the YouTube likes, or whatever. But is it worth it to humiliate somebody for the rest of their lives?"

Lopez added, "What's the point of being a human being if you can't help another person?"