Close to two thirds of the nearly 6,400 rental buildings where owners get tax reductions through the now-lapsed 421-a program don't have required rent stabilization paperwork on file with the state, according to a new analysis by ProPublica. In other words, most of the landlords reaping a combined $1.4 billion from the tax giveaway that's meant to promote affordable housing construction aren't holding up their end of the bargain, and some have been flouting the law/exploiting taxpayers and tenants in this way for more than 20 years.

The nonprofit news site's latest in a series of stories on landlord swindling and government ineptitude chronicles in excruciating detail how every city and state agency that administers the tax break has overwhelmingly failed, leaving building owners free to jack up rents in violation of the terms of the tax abatement.

For example, the city's Department of Housing Preservation and Development charged developers $27 million in fees last year to process 421-a applications, then put just $560,000 of it towards nine employees actually doing the work. The applications can sit pending for years—the city is still sitting on some from the '90s—but the Department of Finance signs off on the tax break without them being completed, meaning the buildings aren't listed with the city as rent-stabilized, though they are saving the owners money. Many of the pending applications are missing something, a city spokesperson told the site. Owners of about half of the 6,400 buildings also failed to register the buildings' apartments as rent-stabilized with the state.

ProPublica followed the travails of tenants at 1355 and 1357 Decatur Street in Bushwick, where it took a savvy, motivated resident and her neighbors innumerable calls to city and state agencies, two lawsuits, and a town hall question to Mayor de Blasio himself to get HPD to investigate the owners, Alen Paknoush and Frank Tehrani of Great Neck, who were making $11,000 a year in tax breaks on the place, according to Pro Publica. In the meantime, the tenants endured allegedly illegal rent increases, 42 days without gas, and threatening text messages when they complained, for example, about having to live with plywood floors, the site reported.

One tenant's eviction was upheld by two separate housing court judges, both of whom failed to see that she was being wrongfully overcharged and that her apartment should be stabilized. Blacklisted for having been taken to housing court, the only place the tenant could find to live was beside the Bruckner Expressway in Hunts Point, according to the site.

Another housing court judge, Susan Avery, allowed the owners, responding to complaints about the hall radiators being run off of metered boilers, to rip the radiators out completely and offer no replacement. 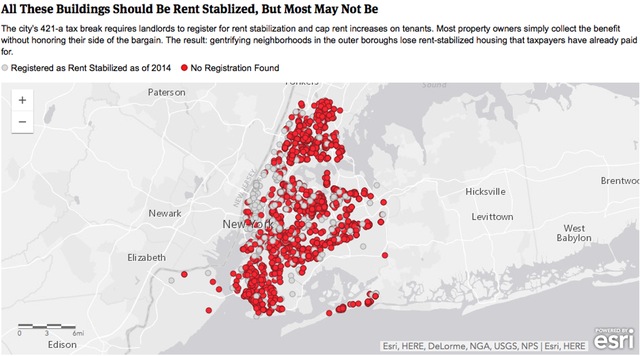 421-a scofflaw buildings exist throughout the city. (ProPublica)

The Bushwick case is more exemplary of the typical 421-a building size and location than headline-grabbing luxury high-rises in neighborhoods such as Brooklyn Heights and Hell's Kitchen, according to ProPublica's analysis, which found that a majority of landlords shirking the rules own 3-10-unit buildings in gentrifying neighborhoods.

To see if your building is listed as 421-a and supposed to be stabilized, check out this handy searchable list.

The Attorney General's Office has taken some tip-toed steps towards enforcement, gently reminding owners of 194 buildings who were apparently cheating their taxes last summer by listing 421-a buildings as condos that they would face legal action if they didn't comply soon—and denying a public records request from Gothamist for a list of the buildings shortly thereafter—then warning the more than 50 who had failed to comply four months later that they really meant it this time. A separate deal with 17 landlords had them put 408 apartments to rent stabilization and pay $5 million into a fund to build low-income housing.

For the moment 421-a exists only for buildings already in the program when it expired this spring, but Governor Andrew Cuomo wants to bring it back, possibly with some sort of union-level wage requirement, so as Preet Bharara likes to say, stay tuned.