Two Teens Turn Themselves in for 9-Year-Old's Shooting 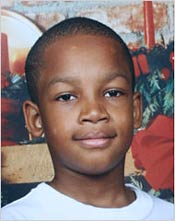 After calls from the NYPD and a critically injured 9-year-old boy's family for help, two neighborhood teens turned themselves in for a Monday night shooting in Crown Heights. Luis Gonzalez, 19, and Jonathan Frazier, 18, were arrested and charged.

The police say the gunfire between Gonzalez and Frazier started because of a third teen, Franklin Gillepsie, who is friends with Gonzalez. Per the Daily News, Gillepsie "was beaten up at a block party at the nearby Albany Houses when he was caught trying to steal a gun." Gillepsie later returned and "took a shot at Frazier but missed" on Sunday. Then on Monday, Frazier biked over to the Weeksville Houses, to find Gillepsie and saw him with Gonzalez.

Gonzalez fired at Frazier, who then returned fire. Shawshawan Kelly was on his bike outside the Weeksville Gardens Houses when a stray bullet hit him in the head. The police had found shell casings from two guns and a sneaker belonging to Frazier at the scene--Gillepsie was also arrested. And Gonzalez lives two floors above the little boy.

While the Police Commissioner said he hoped the arrests would bring "some small measure of comfort to Shamshawan’s family in this horrific event," the boy's father Johnny Kelly told the News, "It doesn't ease the pain. The cops have been excellent, really supportive. It's a good feeling to see that."