Today the Gloucester County Prosecutor's Office announced that two juveniles—a 15-year-old and his 17-year-old brother—were charged with murdering 12-year-old Autumn Pasquale. Autumn was reported missing on Saturday in Clayton, NJ, when she didn't come home at her 8 p.m. curfew. Her body was discovered in a recycling container last night in the same town, and police apparently found Autumn's BMX bicycle at a nearby house. Prosecutor Sean Dalton said that it appeared that Autumn was lured by the 15-year-old, who wanted BMX parts (a neighbor said the teens liked to trade BMX parts). 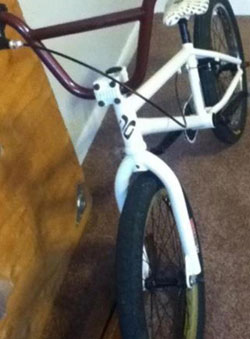 Dalton said that the investigation was still ongoing, but the two brothers may be tried as adults. Additionally, it appears that the boys' mother notified police after becoming concerned by a Facebook posting on one of her sons' accounts.

Autumn was last seen around 1:30 p.m. Saturday afternoon and was biking to her friend's house—another friend told the South-Jersey Times, "She did like to ride her bike a lot. She wasn't a girly girl, she was definitely a tomboy." But she never got to the friend's house and, 90 minutes past her 8 p.m. curfew, her parents contacted the police.

The two boys were charged with first-degree murder, conspiracy to commit murder, disposing of a body, and tampering with evidence of theft; the 15-year-old received an additional charge of luring. They turned themselves in this afternoon. The boys' father, Alonzo Robinson, who has been divorced from their mother and hasn't been in touch with the boys for seven years, told the Star-Ledger that he received calls about his old home being on the news, "I was shocked. I thought, 'That's where my kids are.' All I know is that a little 12-year-old girl's life was taken."

Besides Autumn's bicycle, police found her backpack in their home. Dalton said that the girl died from "blunt force trauma, consistent with strangulation." It did not appear that she was sexually abused. He added, "It's my hope the arrest today provides a measure of closure (for the family) that the individuals responsible for their daughter's death will be held accountable."

Autumn would have turned 13 on Monday. Over two hundred law enforcement officials and thousands of volunteers joined in the search. Her uncle said, "Our little angel Autumn has reached out to the world in her own special way. She's an angel. She was an angel here on Earth, and she's an angel up in Heaven."