If some of your work colleagues arrive drenched in sweat, it might be due to the fact that the A, B, C, D, F, N, Q and R trains were all delayed. But for different reasons!

@MTA are there issues on the Brooklyn bound F train? We're stuck at 57th street and the conductor isn't making any announcements

A train stalled at Canal Street, and then another one at DeKalb Avenue, which sent the B, D, N, Q, and R trains into delay mode:

@NYCTSubway n/b B train sitting at mouth of Bway Lafeyette station. What's going on? No announcements.

Details regarding B, D, And F train service pic.twitter.com/yftnPY6i9W

Gothamist Editor-in-Chief John Del Signore, already aggravated by "a 20-minute wait" for an M train at Marcy Avenue in Brooklyn, wound up on the F to Broadway-Lafayette, where he hopped onto what was supposed to be an uptown express B train. "Big mistake. Just sitting here in the steam," he said. "Passing the time naming the rivulets of sweat rolling down my back. They all empty into Lake Cuomo." 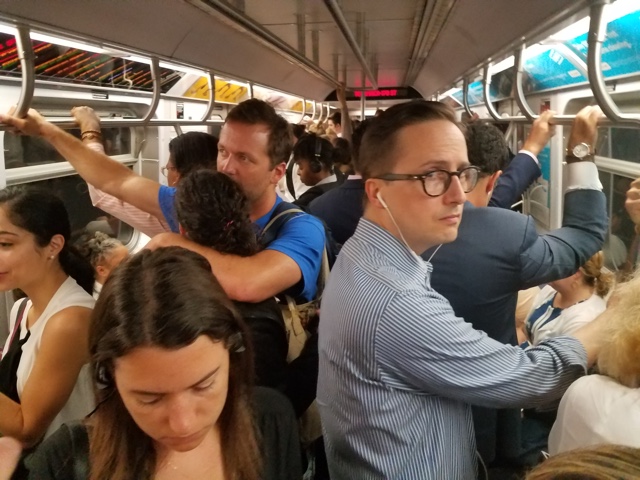 There was also a sick passenger at Jay Street-Metrotech:

Following an earlier incident involving a sick customer at Jay St-MetroTech, A and C train service has resumed with delays.

@NYCTSubway no n/b a,c,e train for 10 minutes at w4 no announcements? What is going on

To be fair, @NYCTSubway was really trying to respond to as many people as possible:

Sorry for the late replay. Were you able to board a train? There is a B approaching the station now. ^JP

Governor Cuomo, who controls the MTA, says congestion pricing can help fund the agency. Cuomo also wants NYC to kick in more money, and Mayor de Blasio is proposing to tax the rich.

Update: Then the 7 bit it, due to "FDNY activity" at Grand Central:

Thanks to multiple @MTA train lines all down at the same time, Court Sq looks like the zombie apocalypse cc @RidersNY @Gothamist @emmagf pic.twitter.com/7lRrx2QMZC

#commute
#stalled train
#subway
Do you know the scoop? Comment below or Send us a Tip