One of the worst stories coming out of last night was that of NYU Hospital's backup generator failing, forcing hundreds of patients to be evacuated, a number of them in critical condition. 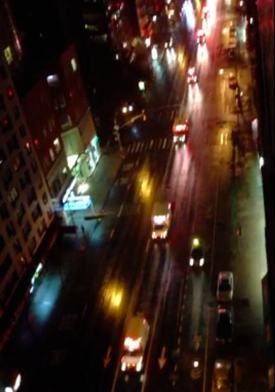 Caravan of ambulances from NYU (via Gothamist reader)

Lorinda Klein, a spokeswoman for NYU Langone Medical Center, said this morning that the hospital did not know yet why the generators failed, and NYU has put out a statement saying that the evacuations were "due to the severity of Hurricane Sandy and the higher than expected storm surge." According to CBS News, a member of the NYU response team attributed the failure to flooding on the hospital's lower levels, where both the pump for the primary backup generator and the secondary backup generator were located.

As for the patients: "The evacuation is still going on," Klein told us. "It will probably end around 11 o'clock this morning." The patients that have been evacuated were taken to Mount Sinai, Lenox Hill, New York Presbyterian and Memorial Sloan-Kettering hospitals, and there is no word yet on their conditions. This morning, Mayor Bloomberg said it's unclear why the generators failed—and that they couldn't tell the public why when engineers were inspecting them. Senator Charles Schumer said that Caterpillar was bringing 200 generators to the city, some to hospitals.

Backup generators failed at Coney Island Hospital as well, but critical patients had been evacuated earlier and no further evacuations were necessary. Bellevue Hospital also suffered a power outage, and various news outlets said the backup generators were running out of power.

At 12:45 a.m., CNN said that the hospital's basement was flooded and was running on backup power without any reported injuries, and according to reports this morning, hospital workers created a human chain to pass containers of fuel up 13 flights of stairs, keeping the generators powered and preventing necessary evacuations. We were unable to contact either hospital this morning, but will update when more information becomes available.