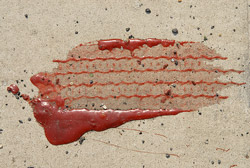 Two hit and run drivers were arrested late this week; one through the actions of a horrified but brave bystander and the other through a successful effort by the Brooklyn Accident Investigation squad. Cops arrived at Sergey Satyr's Mill Basin home Thursday to arrest the 20-year-old for the hit-and-run death of 71-year-old Grace Smith of Sheepshead Bay. The Brooklyn Accident Investigation squad used debris from Satyr's Nissan and a partial license plate number to track the suspect down. Satyr allegedly ran down Smith December 21st on Ocean Parkway near Avenue X.

The arrest of Lawrence Myers was much more immediate yesterday afternoon, after the 38-year-old allegedly ran down 73-year-old Francisco Guerrero on 4th Ave. and 52nd St. in Sunset Park, Brooklyn. Myers is accused of attempting to make a U-turn when he careened into Guerrero, who was crossing the street, and sent the elderly man flying. The driver then sped off before he hit several parked cars, abandoned his minivan at 50th St. and attempted to flee on foot. An unidentified man who was in a barbershop nearby raced out and caught Myers, then marched him back to the scene of the accident. Myers, who was driving without a license, denied having anything to do with the fatal incident. Guerrero died of his injuries at Lutheran Hospital.

Earlier this week, Brooklyn state senator Eric Adams proposed legislation that would stiffen penalities against those who leave the scene of an accident, whether someone is injured or not. Proposed penalties would include the immediate loss of one's driver's license for leaving the scene of an accident. Senator Adams made the announcement from the scene of a Christmas Eve hit-and-run in Manhattan that left two women hospitalized for the holidays.