Two members of the Proud Boys, a bigoted far-right group, were convicted on Monday for their role in a street brawl outside the state's Republican headquarters on the Upper East Side last October.

After just two days of deliberations, a jury in Manhattan Supreme Court found Maxwell Hare, 27, and John Kinsman, 39, guilty of attempted gang assault, attempted assault, and rioting. They will be sentenced on October 11th, and face up to 15 years in prison.

The two were said to play a leading role in the violent confrontation with antifascist protesters last fall, which followed an appearance by Proud Boys founder Gavin McInnes at the Metropolitan Republican Club.

Prosecutors with the Manhattan District Attorney's Office said that Hare and Kinsmen helped "transform a quiet, residential street into the site of a battle-royale, kicking and beating four individuals in a brutal act of political violence."

Video of the assault shows more than a dozen Proud Boys and skinheads swarming the protesters, shouting homophobic slurs, then celebrating the victory with high-fives and chants of "I Like Beer." 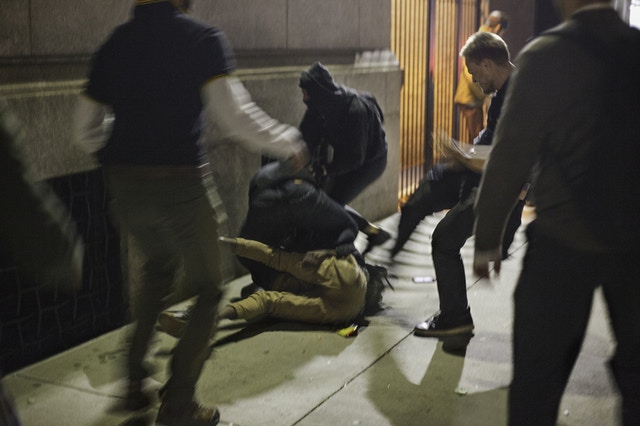 The all-male group bills itself as a "western chauvinist" fraternal organization. They've been labeled an anti-Muslim and misogynistic hate group by the Southern Poverty Law Center, and have been a visible presence at white nationalist gatherings, including the Unite the Right rally in Charlottesville.

Though police did not initially arrest any members of the group, a total of ten Proud Boys were ultimately charged following public outcry. The antifascist protesters were never identified.

In court, prosecutors with the Manhattan District Attorney's Office argued that Hare “threw the first punch," which triggered an "unrelenting and savage attack" against the protesters. Hare, a former Amtrak employee, was also believed to be involved in a brawl in Providence, Rhode Island the week before the encounter—where he apparently bragged about "crushing Antifa skulls."

Kinsman, meanwhile, was described by prosecutors as the "most vicious" of the Proud Boys. He appeared in court sporting a Proud Boys tattoo—a requirement for members of the organization to advance to the "third degree." Fourth degree status is reserved for those who "get beat up, kick the crap out of an antifa," according to McInnes. (He has since "clarified" these rules).

Attorneys for both defendants argued that their clients were acting in self-defense, and accused the Manhattan D.A.'s office of mounting a political attack against the group's members. Kinsman's lawyer, Jack Goldberg, even made a point of referring to the prosecution as the "New York County district Antifa office," according to the Times.

Asked on Monday whether he felt any remorse for the fact that members of his fraternal organization are facing jail time for essentially following his guidance, McInnes accused Gothamist of "FakeNews," then threatened to sue us. He did not respond to multiple follow up requests.