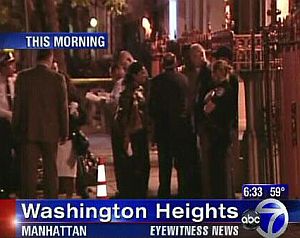 A gang of five trailed a pair of off-duty cops in Washington Heights around midnight last night and jumped them in an attempted robbery that did not go well. Things went sideways for the assailants almost immediately when one of them initiated the attack by picking up a wooden folding chair from the trash and hitting one of the officers on the back of the head with it.

The approach has been known to work with professional wrestlers, but they typically use a metal chair, and in this case the wooden version just shattered into pieces. In the ensuing brawl, the officer shot the chair-wielder in the neck; he was rushed to Harlem Hospital and is listed in stable condition. Two other suspects were arrested, and police are looking for as many as seven other men who may have joined in the attack once it kicked off.

#attack
#cops
#jumped
#mugged
#nyc
#nypd
#off-duty
#police
#robbed
#Washington Heights
Do you know the scoop? Comment below or Send us a Tip