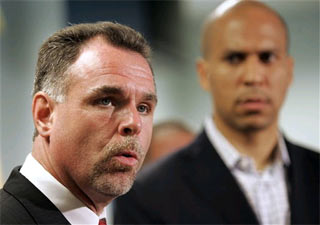 Cops followed suspects in the execution-style killings in a Newark schoolyard below the Mason-Dixon line. Newark Mayor Cory Booker announced that two more arrests were made in connection to the triple murder of three young residents and the attempted murder of a fourth in a schoolyard two weeks ago.

Twenty-four year-old Rodolfo Godinez, was arrested in Maryland early Saturday morning, and shortly after that, his 16-year-old Alexander Alfaro was found 20 miles away in Virginia. The two had been planning on traveling to Texas and fleeing to Mexico and eventually El Salvador to escape arrest. Booker said, "This was just a heinous manifestation of evil by these individuals."

NJ authorities are planning to extradite the two from Maryland and Virginia facilities, but it's unclear how long that will take. There are now five suspects in custody - there others are 28-year-old Jose Lachira Carranza and two 15-year-olds. Carranza and Godinez are considered to be "principal" actors in the shootings. The police are still looking for a third suspect.

Families of the victims are relieved with the two arrests. The victims, 20-year-old Iofemi Hightower, 20-year-old Dashon Harvey, and 18-year-old Terrance Aerial, were shot in the head, execution-style. Hightower's great-uncle told the NY Times that when her mother heard the news of the arrests, she feel "over on me, and we both cried." Aerial's 19-year-old sister Natasha survived being shoot in the head and helped police pick out Carranza from a photo array; she is recovering from her serious injuries and she and her family are under police protection.

The Star-Ledger delves into the detective work that led to Alfaro's and Godinez's arrests: A detective found Alfaro's myspace page and then created a fake one to chat with Alfaro's friends. And the Times looks at how the immigration status of some of the suspects is fueling debate (Godinez happens to have permanent resident status).