Hours after hundreds of protesters marched in the West Village to protest a spike in violent hate crimes, more gay men were assaulted in two separate attacks in SoHo and the East Village. Dan Contarino was jumped on East 4th Street and Avenue D last night; a Facebook photo shows his bruised and beaten face. According to Nightlifegay.com, witnesses say "the assailant was yelling 'f*ggot' as he was kicking and beating Dan." 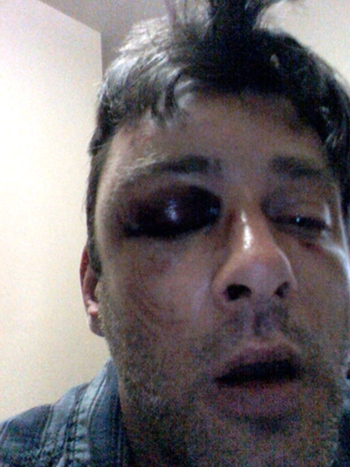 Neighbors reportedly chased the assailant away, but were unable to apprehend anyone. On Facebook today, Contarino wrote: "THANKS FOR CALLS.... GAY BASHED LAST NITE.... back from small surgery.... CHEST XRAYS THIS AM.... suspect still at large... police n media waiting to interview me... U JUST WANNA CRY N MOVE ON...." According to his Twitter, he's still speaking with investigators, who have yet to classify the attack as a hate crime.

We reached out to Contarino and we'll update as more details emerge. Meanwhile, another gay-bashing incident is being reported in SoHo. Shortly before 5:30 this morning, two men were walking down Broadway between Prince and Houston streets a when another two men shouted anti-gay slurs at them. A physical altercation was sparked, and one of the men sustained an eye injury.

CBS2 reports that two men were arrested in connection to the assault: Fabian Ortiz and Pedro Jiminez. They're being charged with third degree assault as a hate crime.

#gay bashing
#hate crime
#hate crimes
Do you know the scoop? Comment below or Send us a Tip