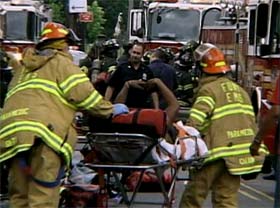 The fire in a three-story building that killed one yesterday morning has claimed two more deaths. A 58-year-old man was in an apartment, dead of smoke inhalation and his wife and 20-year-old son died later at a hospital.

According to the Post, FDNY believe the fire is suspicious; it "broke out between the second and third floors of a building in Middle Village, Queens--"not near any electrical outlets." Five others were seriously injured, including one man who ran for help, while on fire, at the ground-floor deli (the deli's owner doused him with jugs of water).

The fire had cut off the stairwell as an exit. Some residents were so desperate to escape the flames they jumped from their windows, and, in one case, brought down another person who was waiting to be rescued from a ledge. One witness said, "[They] had no other choice - there was smoke and flames right behind."

#arson
#crime
#fire
#middle village
#queens
Do you know the scoop? Comment below or Send us a Tip