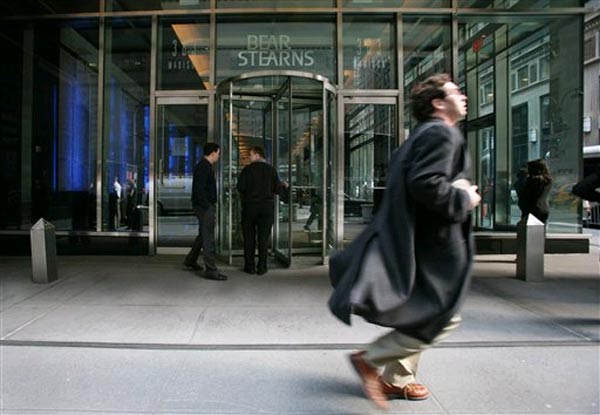 White collar perp walk time: WNBC is reporting that the FBI arrested former Bear Stearns hedge fund managers Ralph Cioffi Jr. and Matthew Tannin this morning. Why? Because they allegedly reassured investors the hedge fund was a-okay "before the funds lost more than $1.5 billion in value."

The WSJ's Law Blog breaks it down: On April 22, 2007, Tannin emailed Cioffi, fearing "the market for complex bond securities was 'toast.'" Then "Cioffi and a third colleague persuaded Tannin that he was overreacting," and a few days later, Tannin and Cioffi promised investors all was well. And Bloomberg News writes, "The charges would be the first from a federal investigation of possible fraud by banks and mortgage companies whose investments in subprime loans and securities plunged in value, causing losses that now total $396.6 billion."

The two were arrested at their homes--Cioffi in NYC, Tannin in New Jersey. The authorities will release more details later, but Tannin's attorney says her client is innocent, "He is being made a scapegoat for a widespread market crisis. He looks forward to his acquittal." This year, JP Morgan bailed out Bear Stearns by buying it as a bargain basement price.