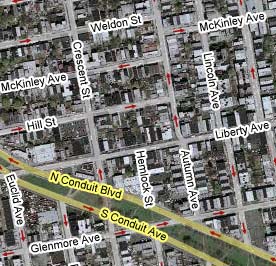 The intersection of Liberty Avenue and Crescent Street in Brooklyn was the scene of two separate incidents of pedestrians being hit by vehicles. According ot the Daily News, the first incident occurred by 12:30PM, when an elderly woman was hit at the East New York intersection. Then at around 2PM, a girl was hit by a cement truck. What are the odds of two people being hit at the same place within 90 minutes?

A witness said, "It was weird. It was the same spot, both women, not even in a long amount of time." And another person said, ""It's dangerous when they turn right here. The street is so narrow."