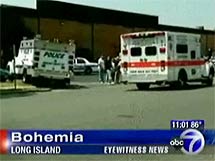 A woman was shot to death by the ex-boyfriend who had recently violated her order of protection against him. The violence occurred yesterday afternoon at the Aflac Insurance sales office in Bohemia, where William Lynch shot Tiana Stokley dead, but not before shooting the supervisor who tried to protect her.

On Monday, Lynch allegedly punched Stokley in the face, but police were unable to find him. Then yesterday, according to Newsday, Lynch went to Stokley's office and "repeatedly asked Stokley to speak with him outside... but she refused." Lynch shot her supervisor Gary Destefano, who had taken Stokley into another room, multiple times with a .40 caliber gun. Then he shot Stokley, before shooting himself.

Destefano was taken to Stony Brook Medical Center with life-threatening injuries. And Lynch's father, who said his son had a child with Stokley, said, "I don't know why he did it...He's always been good ... I didn't know he would turn like this."

#aflac
#long island
#murder-suicide
#order of protection
Do you know the scoop? Comment below or Send us a Tip