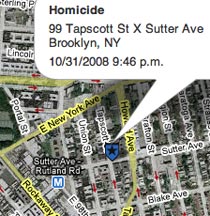 While the police said rumors of gang-related Halloween slashings were unfounded, last night did have its share of fatal violence. The Daily News reports that two men died and others were injured from three shootings and four stabbings around the city.

A 22-year-old man was leaving his aunt's house on Tapscott Street in Brownsville at 9 p.m. when he was "fatally stabbed twice in the groin." Tyreik Davis, a FedEx employee, had just finished dinner; his mother said, "He didn't sell drugs, he wasn't a gangbanger, he never had any trouble with the law - none whatsoever. He was a good boy." The other fatal victim, 22-year-old Alesio Vega, was shot in the Bronx.

The News has details on the other incidents, which include a man being stabbed after being lunged at by "four men wearing 'old man' masks" in Manhattan and another man being "struck in the head with a pipe" during a fight in Queens. You can see other incidents on the Gothamist Newsmap.