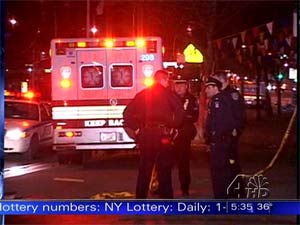 The early Friday shooting of three people by a man angry over being dumped has claimed a second victim. Jessica Gonzalez, died right after being shot in the face twice, while her new boyfriend, Nicholas Maldonado, died yesterday from injuries sustained in the shooting.

Gonzalez was breaking up with Muammer "Mike" Aldailam in a parked car outside the Morrisana section deli where Aldailam worked. Adailam went into such a rage that he used a .380-caliber pistol to shoot her. He then got out and approached the car where Maldonado and a friend were waiting for Gonzalez and fired, hitting Maldonado in the head and Luis Davila in the arm. Davila was last reported to be in stable condition.

Another friend, Stephanie Duran, who drove Gonzalez to the deli for the break-up, had been in the deli's bathroom during the shooting. Duran's sister told the Daily News that Duran returned to the car and "thought [Gonzalez] was sleeping. That's when she saw Jessica was shot in her head."

Police are still searching for Adailam, a permanent U.S. resident from Yemen.

#bronx
#crime
#daily news
#Gonzalez
#news
Do you know the scoop? Comment below or Send us a Tip
A new Gothamist is coming! We’ve moved comments over to our beta site. Click here to join the conversation and get a preview of our new website.