Police arrested two NYPD officers on Monday and Tuesday on charges that they took bribes from karaoke club owners in Flushing and Murray Hill, Queens, in exchange for tipping the clubs off to impending drug raids.

"Instead of upholding the law, the defendants are now charged with tarnishing their NYPD badges to unjustly enrich themselves," Queens District Attorney Richard Brown said in a statement.

Detective Yatyu Yam, 37, and Lieutenant Robert Sung, 50, were arraigned on Tuesday on charges of receiving bribes, official misconduct, and for Sung, of obstructing police work. They each face as many as 15 years imprisonment, according to Brown's office.

The arrests were the fruit of a two-year NYPD Internal Affairs investigation in conjunction with the Queens DA's Office. Prosecutors allege that Yam arranged with the owner of Club JJNY on Northern Boulevard to get paid in exchange for tipping him off to impending narcotics and vice raids, and that over the course of three years, the owner of two clubs paid Yam $2,000 a month for protection and tip-offs. Another owner said he paid in gift cards and electronics. Those owners confessed the payments to investigators, according to a criminal complaint, and a third owner allegedly bribed Sung with a $500 Visa gift card.

Club JJNY is known for weed smoking and ketamine use, and cops from the neighborhood's 109th Precinct are not supposed to set foot in it, according to prosecutors. In August 2014, prosecutors claim that a cop raided the club and cuffed four patrons discovered to be holding drugs, but that Yam told the officer he couldn't make arrests there because it was Sung's "place." Two weeks later, investigators say Yam told the cop, who is now cooperating with the prosecution, that the club's manager had been tipped off to the raid and had screwed up by allowing drugs to be present for it. The officer instructed JJNY's manager to keep people from making 911 calls inside the club going forward, or else face a real inspection, according to the NYPD.

The charging documents hint at an intimacy between the clubs and the precinct that extends beyond the two allegedly dirty cops: the tip was relayed to the JJNY manager by a high-ranking cop at another officer's birthday party, according to a criminal complaint.

When the precinct's rank-and-file were pressed by a deputy inspector to raid clubs, Sung allegedly instructed the cooperating cop to radio that he had combed through JJNY without actually doing so. The officer later conducted a charade inspection of JJNY, steering a captain not in on the conspiracy away from illicit areas. Hearing this described, Sung allegedly said, "Beautiful."

In another instance, the state alleges that Sung learned of a state police plan to inspect clubs and relayed the message to owners through an underling, telling club managers to chill out on the drugs and close at 4 a.m. for the week. 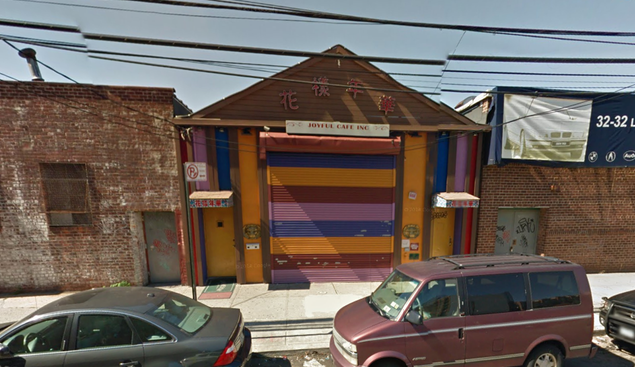 Club Joyful is another alleged source of bribes. (Google Maps)

In September 2014, prosecutors claim that the cooperating cop who was processing two suspects arrested for hard drugs at Club Joyful on Linden Place got a call from Yam asking if he'd been at the club, and demanding he not make the arrests. When the cop refused, Yam allegedly cajoled him into writing out desk appearance tickets for the suspects and releasing them.

The alleged bribes and tips span at least from 2013 to this fall, and five other karaoke clubs are implicated. Yam was held on $25,000 bail, and Sung on $10,000 bail. Both were stripped of their guns and suspended from the police force, though it's unclear whether they're still getting paid.

"I don't really think that’s significant to the story," Sergeant Brendan Ryan, a police spokesman, said when asked whether Yam had been stripped of his paycheck.

Yam is a 10-year veteran of the police force. In 2012, The city settled a false arrest lawsuit naming him and several officers for $12,500. Yam is also one of 13 officers named in a federal lawsuit by Ying Li, released in 2013 after four years in jail on charges that she and her husband Hangbin Li killed their newborn baby. Queens DAs dropped the charges agains Ying Li after a jury found Hangbin guilty of manslaughter and child endangerment. In her lawsuit, Ying Li insists on her and her husband's innocence, and alleges they were railroaded by doctors, cops, and prosecutors who ignored exculpatory medical evidence and were driven by "unconcealed and unrestrained" anti-Chinese racism.

Yam served as a Mandarin interpreter during the initial investigation into baby Annie Li's death. Ying Li's lawyer said that it is too early in the civil case to tell what role Yam played in the alleged malicious prosecution, but that it would make sense if Yam was corrupt.

"Typically when police officers are acting unlawfully in one sphere they most likely have acted unlawfully in others," Ameer Benno said. "This is a good revelation and we’re pretty confident our allegations will be borne out."

Sung and Yam's lawyer did not immediately return a call seeking comment. No one answered at a number listed for Club JJNY owner Jun Wu, and the number advertised on the club's awning did not ring. It was not immediately clear how to reach Club Joyful.

The owner of the building that houses that club paid an $800 fine in 2009 after building inspectors discovered people dancing inside, contrary to the building's certificate of occupancy, Buildings Department records show.