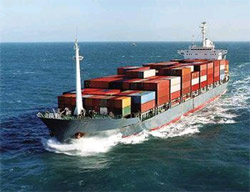 Yesterday morning, two Bangladeshi brothers jumped off a freighter ship that was leaving the Port of Newark, "somewhere between the Kill van Kull and Verrazano-Narrows Bridge." One brother was found, while the other is still missing.

Authorities say that 27-year-old Mohammed Nayem Uddin was found by fishermen on Hoffman Island, "shivering and covered in garbage bags." The Staten Island Advance reports he was taken to the hospital for hypothermia-like conditions. Uddin did not cooperate with the police, who tried to communicate with him through a translator. His 21-year-old brother Mohammed Bakhtier Uddin is still missing. The Coast Guard, NYPD, and FDNY canvased the area between the Kill van Kull and Ambrose Channel.

The police aren't sure why the Uddins jumped off the ship, a 797-foot freighter named the Manhattan Bridge. Their passports were found on the ship; immigration officials have not commented.