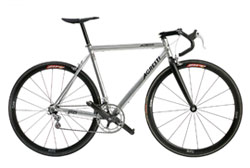 Yesterday morning, two men riding bicycles were killed in separate accidents. Both occurred in Brooklyn. Around 4AM, the a 26-year-old at Union Avenue and Ten Eyck Street in East Williamsburg was hit by an oil truck. WABC reported that he was cycling in the wrong direction. The cyclist, identified as Craig Murphy [sic] who is a member of RightRides, died at the scene. The truck driver was not charged.

Then, in Bedford Stuyvesant, around 6AM, a 25-year-old was hit by a white passenger van at Utica Avenue and Fulton Street. He died at the scene and the van's river was charged with criminally negligent homicide after police determined he was speeding.

A witness told Streetblog how the East Williamsburg intersection was dangerous:

"The intersection is absolutely terrible, people just peel around and often come very close to hitting me or my dog... Actually, all the intersections along Union Avenue in WBurg are like that. It is really, really hard to cross the street. The intersection where this tragedy occurred is a "T" so you can really only cross when the walk light says stop, because no one ever, ever, ever pays attention to the walk signal when they have the green light."

She added that the "bicycle [was] completely flattened under the back left tire" of the truck. Transportation Alternatives executive director Paul Steeley White told amNew York, "Protected street space for cyclists is the surest way to make biking safe. The city must continue to work tirelessly to provide bicyclists with the protections necessary to ensure safe travel."

And there was another terrible death caused by a vehicle: A Cadillac Escalade SUV backed up over a baby - being pushed in a stroller by his grandmother - in Queens. The 8-month-old died at New York Medical Center. The Daily News reports that the police are probably not going to charge the driver, but "It was unclear whether the huge Escalade was equipped with a rearview camera system."