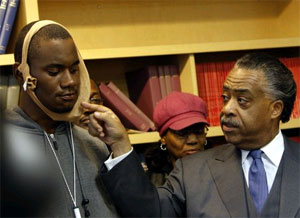 The police arrested two white men in the the beating of a black man in Staten Island. The Reverend Al Sharpton appeared with the victim and said, "We cannot live in a city, state or nation where people cannot safely be in the streets or anywhere else because of the color of their skin."

In Mariners Harbor on Tuesday night, 20-year-old Skylar McCormick and four friends - who are white - were having a foot race down a street and, at one point, he leaned (the Advance reports he "either touched or jumped on...accounts vary") against a Cadillac, raising the ire of the car's owner and his friends. Five white men, allegedly using racial slurs and carrying a baseball bat, followed McCormick, who was beaten and whose jaw was broken in two places.

The car's owner, Daniel Avissato, 21, and Mark Maleto, 21, were charged with a number of crimes including assault as a hate crime and aggravated harassment as a hate crime. Others are being questioned. Mariners Harbors residents are shocked; Brandon Freeman, who is black and is friends with Avissato, told the Advance, "The idea...is ridiculous. Because it was four white kids in a Cadillac, they are automatically going to say it's racist. If it was a white kid, it wouldn't even be on the news."

You can watch Sharpton's press conference here; he says that with all the hangman's noose incidents, since "no one has paid," people are encouraged to continue putting them up. Last weekend, a racist message was found on the visiting Harlem Hellfighters football team's bench when they were playing against an S.I. high school. And in another hate crime incident, swastikas were found on a volunteer Hatzolah ambulance in Queens. Police Commissioner Kelly said they were a result of a "copycat syndrome" of hate crimes modeled after the swastikas found in Brooklyn.