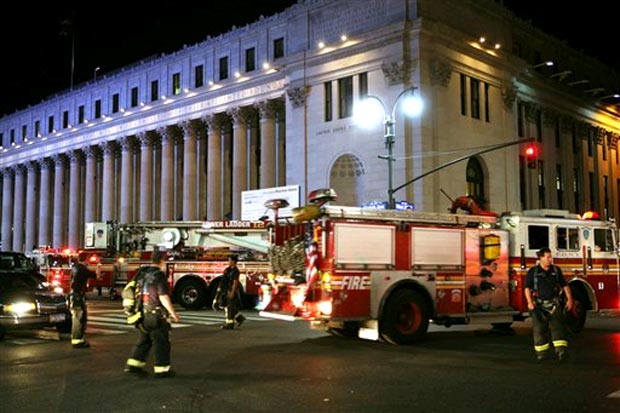 Photograph of FDNY responding to the fire by David Karp/AP

Last night around 10:50 p.m., heavy smoke was reported at the James A Farley Post Office on Eighth Avenue. Dozens of people were evacuated as the city's only 24-hour postal service branch was shut down so firefighters could locate the cause.

At first, one hypothesis was that the fire was coming from train tracks below the station (the trains run under the station from Penn Station), but the FDNY says the fire was, per the Daily News, caused by four "heavy duty electrical cables under the entrance staircase" near the 33rd Street side of the building. The insulation around the cable (described as "gigantic") had burned off.

The post office remained closed for hours. Con Ed, which shut off power to the building, is still investigating. And the landmark Farley building is at the center of an ambitious, long-gestating West Side development plan that at one point involved moving Madison Square Garden to the building but now only involves moving some train lines and creating retail and other development.