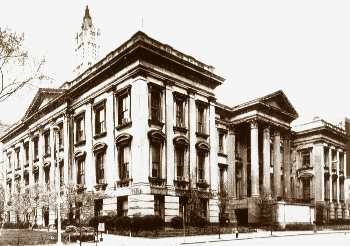 Improper construction that posed a serious safety threat to pedestrians led to the adjustment of three modillions from the Tweed Courthouse. The building just underwent an $89 million renovation six years ago, but someone forgot to properly glue the architectural ornamentation to the building's cornice.

The safety problems on one of the city's most prominent landmarks went unnoticed until a city Buildings Department manager gazed at Tweed while walking to his office on Chambers St. in lower Manhattan.

The Buildings Department manager was able to see the flaw from Chambers St., and walked to the third floor of 280 Broadway to tell his boss.

Ironically, or fortunately, the Buildings Dept. is practically across the street from the Tweed Courthouse, in the old New York Sun building. The company that did the work and forgot the epoxy will repair the building at no charge. The Tweed Courthouse––just north of City Hall–– is one of the most infamous buildings in New York City's history. It took 20 years to build and was a financial sieve that lined the pockets of Boss Tweed and his cronies in 19th Century New York for two decades. Again true to form, the $89 million renovation of the courthouse cost three times the initial estimate during Mayor Giuliani's adminsitration.

The opulent space was promised to the Museum of the City of New York so the public could benefit from its grand staircase, skylights, and design, but was delivered to the Dept. of Education by Mayor Bloomberg upon completion of the renovations.