Donald Trump would need hands the size of backhoes to clean up the garbage behind one of his son-in-law's East Village buildings.

The refuse piled in the back yard of 118 East 4th Street was “Dickensian,” says longtime tenant Jennifer Hengen. It filled the sunken yard at least five steps high, and included “decomposing rat carcasses.” The building also went without gas for almost five months. Tenants got service turned back on in early March after they filed an “HP action” lawsuit in Housing Court demanding repairs from their landlord, Jared Kushner, and then filed a motion to hold him in contempt after his representatives didn’t show up for the first hearing.

The building is one of more than 50 that Kushner—who married Donald Trump's eldest daughter Ivanka in 2009—has acquired over the last four years. He has spent more than $400 million buying portfolios of properties in Manhattan, Brooklyn, and Astoria, but most are in the East Village, making him the neighborhood's second-largest landlord after the notorious Steven Croman, says Brandon Kielbasa, an organizer with the Cooper Square Committee.

On the campaign trail, Trump frequently praises his "amazing" son-in-law for being a "very, very successful real estate entrepreneur in Manhattan."

"Jared is a great young man, went to Harvard, very smart, doing a fantastic job in business, he's in the real estate business and has done an amazing job," Trump told the crowd after a campaign rally in January.

Kushner’s business model might be described as an “apex scavenger,” according to interviews with about a dozen tenants in several of his buildings—many of whom insisted on anonymity for fear of retribution—and housing organizers working with them.

At least 40 of his buildings were purchased from Ben Shaoul and Stone Street Properties, owners who specialized in buying buildings that contained large numbers of rent-stabilized tenants, and inducing them to leave with a combination of trumped-up eviction notices, buyout offers, and messy, all-hours construction in the vacated apartments. Once the empty apartments were renovated, they could be rented out at luxury rates.

Kushner, who also owns the NY Observer, has used those tactics, but usually buys buildings that have “already been worked over,” says Kielbasa, who has worked with tenants in buildings owned by Kushner and Shaoul. Kushner, he says, treats both rent-stabilized and market-rate tenants badly, and seems to feel that he can get away with not maintaining buildings because the housing market is so tight he can keep them full anyway. 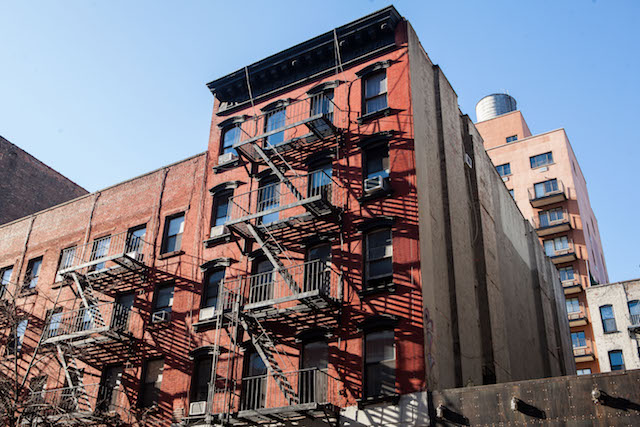 “Overall, it seems to be a company that only cares about renting apartments,” says Ben Mackey, a market-rate tenant of Kushner's Westminster Management, whose website calls the neighborhood “the most exciting” in Manhattan with “upscale and exciting nightlife.”

A Westminster spokesperson says the gas was “shut off by Con Ed after reports of a gas smell, an issue we take very seriously,” on Oct. 12, but does not say why it took nearly five months to restore service. The company says they are providing more trash bins and have brought in an exterminator for a special inspection.

The spokesperson noted that "we are at the last stages of finalizing an agreement that not only assures the prompt addressing of all issues, but will also include a compensation package based upon the unintended and unavoidable disruption of services," and said that resident now have "access to an emergency phone line in order to inform us of concerns, to which we respond as quickly as possible and work to find permanent solutions to all issues.”

The spokesperson added, “Unfortunately, like many other old buildings in New York City, repair issues arise periodically and we inherited problems when we purchased this building. We are grateful that our residents have voiced their concerns. We value their tenancy and we are committed to a mutually beneficial long term building management-tenant relationship."

The building is one of seven along East 4th Street Kushner bought from Ben Shaoul for $49 million in early 2013, according to The Real Deal. Shaoul, who had acquired the buildings in 2010 and 2011 for about $25 million, “really preyed on the infirm,” says Hengen, who recalls a property manager screaming at her when there was an electrical fire in her ceiling the night she got out of the hospital. He changed the front-door lock code during Hurricane Sandy in 2012 without informing tenants, says David Dupuis, who has lived in the building since 1983. “I was coming home and couldn’t get in.”

“His people were psychotic, screaming on the phone,” says another Fourth Street resident who asked to remain anonymous. “Dust, noise, unprotected workers. It was two years of hell,” adds another, who had his phone service cut off for four months when renovation work damaged the cables. “People left in droves.”

By the time Shaoul was through, only five of the 24 apartments at 118 East 4th still had rent-stabilized tenants. In the 45-unit building next door, less than 10 remained. Shaoul told The Real Deal in 2013 that he was “redeveloping a portfolio of under-managed assets” and planned to sell them to a long-term investor—a sophisticated way of saying “emptying them and flipping them.”

Kushner came by this wealth by being the son of Charles Kushner, a politically connected real-estate developer from New Jersey. The family owns more than $2 billion in property in New York, New Jersey, and Maryland. He largely took over the business after his father was imprisoned in 2005 for making illegal campaign contributions.

After Charles Kushner found out that his sister and brother-in-law were cooperating with the federal probe, he paid a prostitute $10,000 to seduce his brother-in-law, and sent the video to his sister.

In March 2015, Kushner bought a 16-building portfolio from Stone Street Properties for $131.5 million, including properties in Murray Hill, Greenwich Village, the East Village, the Upper East Side, and Boerum Hill. Stone Street and its partner HIG Realty Partners had paid $73 million for the portfolio in 2012.

Stone Street used Shaoul-style methods to get rid of rent-stabilized tenants. In one building, a man moved out because the construction dust exacerbated his lung disease, according to another tenant.

At 354 and 356 State Street in Brooklyn, Stone Street “purged these two buildings of about two-thirds of their rent-stabilized tenants,” says longtime housing organizer Dave Powell of the Fifth Avenue Committee, and Kushner came in “largely after the damage has been done.” Rents for the renovated apartments there doubled, from $1,200-$1,300 to $2,400-$2,900.

“Our problems started with Stone Street,” says Kim Stetz of 438 East 13th Street. “Stone Street did the dirty work.” She went three months without gas in 2014, and her electricity was also knocked out. The renovated apartments there rent for around $3,500, she says, with one three-bedroom going for more than $7,000.

Stone Street has not yet responded to a request for comment.

Kushner is “not as slimy” as Shaoul, says a 4th Street tenant who asks for anonymity because “I’ve been through enough shit with these damn landlords.”

But at 170 and 174 East 2nd Street, the residents of more than two-thirds of the 42 apartments moved out within four months after Kushner took over the building (the spokesperson said they were aware of only one). They faced what Brandon Kielbasa described that year as “construction dust, debris-filled hallways, collapsed ceilings, broken doors, and a gas leak that led to the entire block being cordoned off by the Fire Department.” 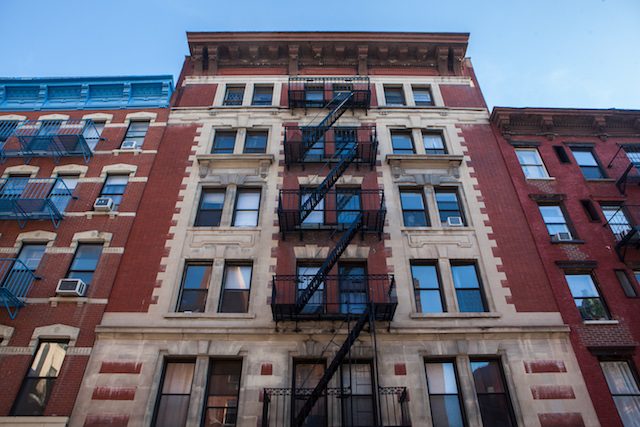 “He pressured a lot of the tenants to leave,” says Mary Ann Siwek, who has lived in the building for more than 30 years. “A lot of them didn’t want to hold out, because it was so horrible.” Some left the city, she adds.

“We're constantly investing to upgrade distressed buildings in our portfolio and improve the quality of life for our tenants. At 170 East 2nd Street in particular, we worked to correct a number of issues we've inherited from prior ownership,” the Westminster spokesperson responds. “We do not engage in harassment of any kind.”

Tenants held a rally in front of the building in September 2014 with City Councilmember Rosie Mendez and Manhattan Borough President Gale Brewer. A Westminster spokesperson told The Villager that the people who wouldn’t move out were illegal residents who weren’t really rent-stabilized and were just stirring up trouble to get a bigger buyout offer.

“I think he’s more careful since East 2nd Street took him to court,” says another East Village tenant. “He doesn’t actively harass us like Shaoul did,” says Jennifer Hengen, “but he neglects us.”

Garbage is the most common complaint. At 170 East 2nd Street, “by Sunday, you couldn’t walk in the hallways,” says Siwek. “Garbage was out of control,” says one East Village tenant. “Garbage everywhere,” says another. At 118 East 4th, Hengen says, the problems began when Westminster began putting garbage in the back yard because they were getting summonses for putting it in front of the building.

One reason for this, tenants say, is that Westminster and the previous landlords cut back on superintendents. In some buildings, their apartments were renovated and rented at luxury rates. Some say that their new superintendents don’t live in the neighborhood and only work weekdays. At 118 East 4th, one lived in Staten Island. The current one lives in the Bronx and is responsible for 25 buildings, says David Dupuis.

“If this is the way he intends to manage properties in general, then it's alarming. Tenants of 118 East 4th Street are not the only folks that we've heard complaints from, so that points to a bit of a pattern,” says Brandon Kielbasa. But the battle at 118 has “reignited” the coalition of tenants in Kushner buildings, he adds.

“The majority of our superintendents live in the East Village and in proximity to the buildings they serve,” a spokesperson for Westminster told us. “In order to respond to complaints and emergencies as they arise, we make every effort to hire superintendents who live locally.” The spokesperson added that the number of buildings they’re responsible for varies, depending on the size of the building and other factors.

The economic differences between the old and new residents paying three times as much have also created a culture clash. Some longtime East Villagers, nurses and artists and filmmakers loyal to the neighborhood, resent the transient, party-animal culture of affluent students and out-of-towners in their first New York apartment who will be gone when their lease expires.

“We used to have a community in this building,” laments one man. Before Stone Street and Kushner, says Kim Stetz, “we didn’t have SantaCon in our building. We didn’t have raging parties with people throwing up out their windows.”

“The stuff we’re requesting from them costs 10 cents, and they’re billionaires,” say Jennifer Hengen. “Am I being melodramatic when I say ‘class warfare’?”

#donald trump
#east village
#jared kushner
#real estate
#longform
#original
Do you know the scoop? Comment below or Send us a Tip