Donald "we're going to beat China" Trump, who has pledged to impose yuge tariffs on goods from the Asian country if elected president, has no problem helping wealthy Chinese people get visas to come to the U.S. to help finance a New Jersey tower with his name on it. Bloomberg reports that Trump Bay Street, a 50-story luxury rental complex in Jersey City, is being built by Trump's son-in-law Jared Kushner using tens of millions of dollars in money from the controversial EB-5 visa program, which offers investors who provide a minimum of $500,000 in financing a two-year visa and a shot at permanent residency in the United States for them and their families.

The program brings about 10,000 foreign millionaires to the U.S. a year on visas, about 85 of them from China, and has been used to help finance the Atlantic Yards and Hudson Yards mega-developments, among other big-ticket New York-area projects.

The hypocrisy of this for Trump is obvious. Bloomberg reports:

Yet no skills are required of the wealthy Chinese being courted by a Chinese-subtitled video to help finance a huge Trump-branded tower in New Jersey. The video leads viewers behind the wheel of a car into Jersey City with scenes of the tower, all to the tune of the theme song from The Sopranos, "Woke Up This Morning." 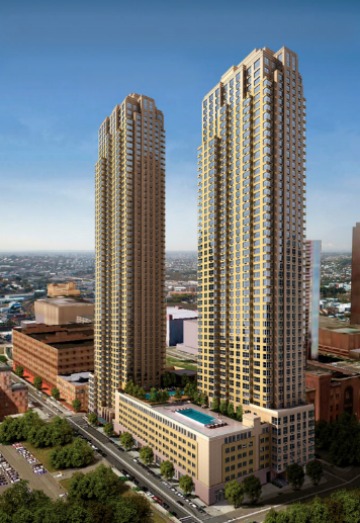 Trump Bay Street reportedly raised $50 million, a quarter of its funding, through EB-5 loans, nearly all tracing back to investors from China.

A Trump spokeswoman objected that Trump merely sold his name to the project, as is the case with the much of the real estate out there bearing the Trump imprimatur, and is not managing the finances.

The EB-5 program has come under fire recently from government watchdogs and Democratic and Republican lawmakers who note that the program doesn't require proof of education, work qualifications, or the source of applicants' money, and leaves the door open for fraud by applicants. The program also fails to track how many jobs are created by EB-5-financed developments.

Kushner Companies declined to tell Bloomberg exactly how far Trump's involvement in the Trump Bay Street development goes, but said that its use of the visa program is proper and created "hundreds of new jobs in an area with employment needs." Construction on the tower is set to wrap up this summer.

Of course, it's unlikely that any of this will change the mind of the Trump voter convinced that Trump is a "successful" businessman who "isn't afraid to say what everyone thinks." His involvement in a program that is shuttling barely vetted Chinese oligarchs into the country by the thousands is just one of innumerable examples of his business dealings that undermine his white nationalist boasts and claims of a solid-gold business empire built on his unmatched dealmaking ability. Pick a business project at random—the Make America Great Again hats mass-produced by presumably non-rapist, non-criminal Mexican immigrants, the Spa at Trump SoHo offering "Morroccan Ritual" purifying baths modeled on Muslim prayer washing, the foreign guest workers staffing the Mar-a-Lago, the "university" that allegedly operated more like a pyramid scheme, the Scottish golf course, the alternative football league—and you're likely to find some combination of opportunistic accommodation of foreigners and minorities, acrimony, and lawsuits.

But as John Oliver explained in his milestone takedown of Trump last week, "The problem is, even when you can demonstrably prove Trump to be wrong, it somehow never seems to matter. You can hold his feet to the fire, but he'll just stand there on the stumps, bragging about his fireproof foot-skin."