Mayor de Blasio predicted on Monday that the appointment of Dr. Ben Carson as head of the Department of Housing and Urban Development will prove one of the most impactful Trump administration appointments for New York City. Not only does NYC have the largest housing authority in the country, serving more than half-a-million residents, but the city estimates that more than 85 percent of its Housing Preservation and Development budget comes from the federal government. Federal money is used to fund the Section 8 rental voucher program for tens of thousands of low-income New Yorkers, and subsidize the construction of affordable housing laid out in the Mayor's affordable housing plan.

"Of all the members of the Trump team this will be the person I will arguably work with the most," the mayor told reporters. "So I'm going to have an open hand here. I'm going to hope for the best."

Carson, a retired neurosurgeon with no prior experience in housing administration, is openly opposed to government spending. "We the people have the responsibility to take care of the indigent in our society," he said at a Republican event in February. "It's not the government's job."

When it comes to housing policy, he's rarely weighed in. The NY Times cites a July 2015 Washington Times opinion piece as one of his only forays. In it, Carson criticizes an Obama administration policy to hinge federal housing funding on a community's ability to implement anti-segregation policies—one that will fall under his purview at HUD. In a 2015 interview with an Iowa radio station, Carson decried new anti-discrimination housing guidelines in city of Dubuque as "what you see in communist countries."

"He's come out on that issue unlike any other issue in HUD," said Victor Bach, the housing policy analyst for the Community Service Society, an affordable housing advocacy group. "He is other than that a blank card."

Mayor de Blasio acknowledged Carson's lack of relevant experience this week. "Because he doesn't have a formal background in housing issues, it will be important for him to see what the reality is for our people," he said. "I will welcome him here. I'll take him on a tour of our public housing and show him how important our affordable housing programs are."

Carson will inherit, in NYC specifically, programs that are already struggling and cash-strapped. Thanks to Congress, federal funding for housing has diminished considerably since 2013. Section 8 rental vouchers have been closed to NYC applicants since 2009, and the waiting list for applicants is notoriously long—in NYC, about 120,000 residents.

NYCHA reported $17 billion in capital debt in March 2015, and is in the midst of selling off chunks of NYCHA-owned property: a controversial effort to shore up funds. Meanwhile, apartments are plagued with lead paint, darkened stairwells, and a dearth of cooking gas and air conditioning. Many NYCHA properties are located on the waterfront, and were severely damaged during Hurricane Sandy.

"A lot of public housing was built in the 40s and 50s," said Stephanie Rudolph, a senior attorney with the Urban Justice Center who has been representing NYCHA tenants for the last five years. "They have had no rehab to the original plumbing and gas lines. We are working with lots of developments that are essentially crumbling."

"I think this is a very scary proposition especially for NYC, where the public housing buildings are in really bad shape," she added. "The reason NYC is still a diverse city even though it's so expensive is public housing. Once that's gone it's pretty terrifying what our city will look like."

In response to Carson's appointment, NYCHA reiterated its needs. "We hope to partner with the incoming HUD Secretary to ensure New York City's public housing is not only protected, but strengthened for the next generation," a spokesman stated Tuesday. "Our residents deserve the same quality of life and opportunity as all Americans, which means keeping the promise to fund public housing and Section 8 while also creating safer, cleaner, and more connected communities." 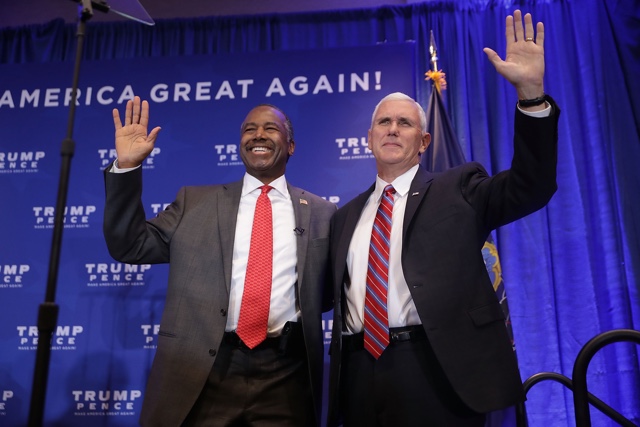 Cuts to federal funding, and tax cuts, could also slow the construction of below-market rate apartments in NYC.

This past February, the New York Times reported that nearly half of the 40,000 units of housing created under the de Blasio plan to date were subsidized with the federal tax-exempt bonds.

And WNYC economic development reporter Janet Babin addressed the threat to affordable housing construction in a segment on Carson's appointment this week. Under Carson and Secretary of the Treasury Steven Mnuchin, she said, the Trump administration is "widely expected to cut the corporate tax rate."

"If that happens," she predicted, "It could affect the financial instruments that provide most of the development of affordable rental housing we see in NYC. It's called the Low Income Housing Tax Credit, and these are tax incentives that end up financing low income housing. If the corporate tax rate goes down the corporations don't need these tax credits as much, so there will be less incentive to buy them."

Trump, meanwhile, has suggested that Carson's upbringing in part qualifies him to control a federal agency with a $47 billion budget (for now). "Dr. Carson is a distinguished national leader who overcame his troubled youth in the inner city of Detroit to become a renowned neurosurgeon," his transition team wrote in a statement.

Mayor de Blasio also alluded to Carson's past. "He clearly understands a lot about life in an urban environment, and it's a personal passion of his to do something to improve people's lives," he said. "He's devoted his life to that through his medical work, obviously, as well as his charitable work."

Brooklyn Councilmember Jumaane Williams, chair of the city's Committee on Housing and Buildings, was less amenable. "Ben Carson's nomination as Secretary of the Department of Housing and Urban Development is ill-advised, irresponsible and hovers on absurdity," he said.

"Overcoming a 'troubled youth in the inner city of Detroit,' and growing up in public housing does not make Carson qualified to hold this important position," Williams added.

Legal-Aid attorney Judith Goldiner added that she was troubled by Carson's bootstraps rhetoric.

"We are concerned because Carson doesn't seem to have a full understanding of who lives on Section 8," Goldiner said. "In NYC a lot of people work, but housing is so expensive here that they really can't find somewhere to live without the system."

Carson, for his own part, said he was "honored" by the appointment. "I feel that I can make a significant contribution particularly by strengthening communities that are most in need," he stated.

The sentiment marks a complete reversal in under a month. In a November 15th Washington Post interview the former presidential candidate analogized that, "Having me as a federal bureaucrat would be like a fish out of water, quite frankly."

[Update 7:00 p.m.]: An earlier version of this piece inaccurately stated that Carson grew up in public housing, based on multiple media reports. Armstrong Williams, a friend of Carson and the NY Times's source for this information, clarified that this was not the case on Monday night.

Dr. Carson's mother worked 3 jobs at a time to keep them out of public housing, but he grew up around many who utilized housing programs.

#affordable housing
#ben carson
#donald trump
#hud
#nycha
#original
Do you know the scoop? Comment below or Send us a Tip