Trump Will Withdraw U.S. From Paris Accord On Climate Change

The United States will withdraw from the Paris Climate Accord, as announced by President Trump this afternoon.

The agreement has been upheld by nearly 200 countries and is considered the most important climate change-related agreement in history. During Trump's campaign, he pledged to pull the United States out of the agreement, claiming it would hurt jobs in the States—this argument has been disputed by environmental groups and many economists. And though the majority of Americans support remaining in the agreement, according to a recent poll, in the end Trump sided with advisors like Scott Pruitt and Steve Bannon, as well as Senate Majority Leader Mitch McConnell.

"In order to fulfill my solemn duty to protect America and its citizens, the United States will withdraw from the Paris climate accord but begin negotiations to reenter either the Paris accord or an entirely new transaction on terms that are fair to the United States," he said. “We are getting out. But we will start to negotiate, and we will see if we can make a deal that’s fair. And if we can, that’s great."

The announcement was met with uproar. Senator Bernie Sanders called the decision "an abdication of American leadership and an international disgrace." Al Gore called it "reckless and indefensible." New York Governor Andrew Cuomo called the decision "irresponsible," and announced he'd be signing an Executive Order "confirming New York's leadership role in protecting our citizens, our environment, and our planet."

Republican Senator Susan Collins said she was "disappointed" by the President's decision. Elon Musk, who serves on Trump's business council, announced he'd be departing said council over the decision. President Obama, who joined the agreement, said that Trump will "reject the future" by pulling out of the accord.

"The nations that remain in the Paris Agreement will be the nations that reap the benefits in jobs and industries created," Obama said in a statement. "I believe the United States of America should be at the front of the pack." Obama added, "But even in the absence of American leadership; even as this Administration joins a small handful of nations that reject the future; I’m confident that our states, cities, and businesses will step up and do even more to lead the way, and help protect for future generations the one planet we’ve got."

The Weather Channel went all in:

The Weather Channel reacts to Trump's announcement: (via @ScottGustin) pic.twitter.com/ylcyXf4AbY

And Pittsburgh, name-checked in Trump's speech this afternoon, is not happy. 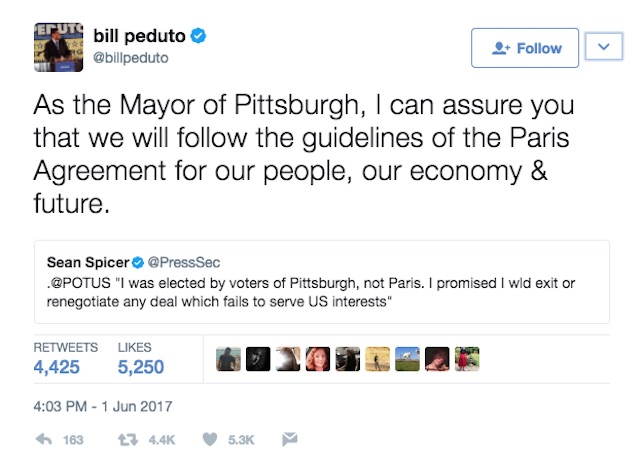 194 out of 197 recognized countries have signed on to the Paris Agreement. The United States now joins Nicaragua and Syria in dissent.

“At what point do they start laughing at us as a country?"

Thanks to the Accord's lengthy withdrawal process, it could take up to four years to fully pull out of the agreement. It is possible, should Trump not be re-elected, that the next president could choose to remain in the agreement.

Still, the United States pulling out of an agreement it initially helped champion sets a chilling precedent for the Accord, which relies on global participation to help mitigate greenhouse gas emissions and rising temperatures. “This is disgraceful,” Annie Leonard, Greenpeace USA’s executive director, told the Times. “By withdrawing from the Paris Climate Agreement, the Trump administration has turned America from a global climate leader into a global climate deadbeat.”

#climate change
#global warming
#paris accord
#paris agreement
#president trump
Do you know the scoop? Comment below or Send us a Tip