"I'm feeling fucking amazing," Murray Hill resident Jerry Paul Pio, 26, said, as the final votes came in. He stood with a contingent of selfie-taking Trump fans across the street from Trump's Hilton Hotel victory party on Sixth Avenue. "Honestly, I think he's a genius who's been planning this for the last 30 years, and every single fuck-up along the way was a part of the master plan, which worked."

At Rockefeller Center, hundreds of predominantly pro-Clinton New Yorkers expressed worry, disgust and numbness as Pennsylvania, then Wisconsin, were called for Trump. With every new report of Clinton's worsening prospects, a handful of people stood up and walked away: mostly silent, many crying.

Forest Hills resident Mimi Levitan was nervously smiling at 11:20 p.m., but said she had given up all hope by 1:00 a.m. "I'm kind of finding it hard to swallow right now," she said. "Trump scares me as our president. He has run a divisive campaign and he'll run a divisive country."

Trump, the first man without any governmental or military experience to be elected president in the United States, won 276 electoral votes to Clinton's 218. But the race was too close to call for hours after the polls closed, with neck-and-neck returns seesawing battleground states past midnight.

Earlier in the evening, New Yorkers and out-of-town visitors said that Midtown felt quiet, almost eerie. "You can hear a pin drop," said Chris Rioux, a Clinton voter from Chicago, standing in Times Square around 9:30 p.m. "I think there's a palpable nervousness in the air right now."

Pockets of dedicated support for both candidates were established by 7:00 p.m. and grew steadily throughout the night. Hundreds of Trump supporters filled a plaza in front of the News Corporation building on Sixth Avenue between 47th and 48th Streets, crowding the sidewalk by midnight despite police crowd-control efforts. Make America Great Again hats were popular in the front rows. A block west, the standing-room Rockefeller Plaza crowd crammed between two large monitors. Clinton supporters packed the Javits Center.

Trump Tower on Fifth Avenue and the New York Hilton on Sixth were heavily barricaded with police fencing and bumper-to-bumper Sanitation trucks throughout the night. At 8:00 p.m., and again at 10:30 p.m., the sidewalk crowd across the street from Trump Tower was thin, with a few Trump supporters holding signs in a police pen and people fanned out along the sidewalk staring at their phones. After the election was called, a small but euphoric group of young supporters posed for photos and spoke to reporters from outlets around the world. "Finally, something for us—something that makes us happy!" one young black man shouted as he high-fived a few white Trump supporters. 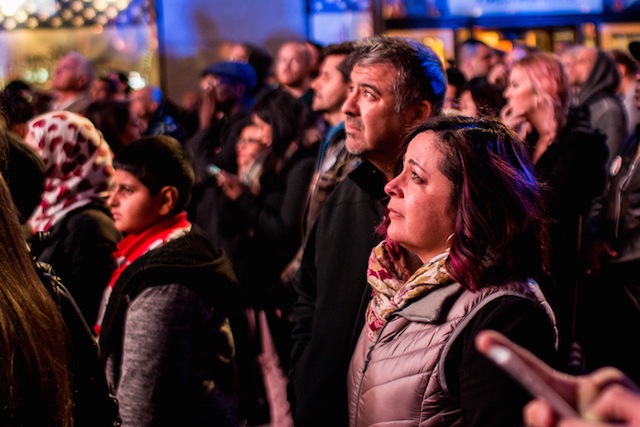 Many of the Trump voters we spoke to on Tuesday night called for stronger national borders. Most were skeptical of Muslims and harbored strong anti-government sentiment, along with a desire to upend the current political system.

Trump's campaign, launched with xenophobic, racist statements about Mexican immigrants and Muslims and the pledge to build a wall along the Mexican border, was punctuated with the candidate's firm dismissal of numerous sexual assault allegations and investigations into his money handling. Voters on both sides questioned the motives of the Democratic establishment, while Clinton denounced Trump's divisiveness and faced a steady stream of inquiries into her private email server.

Gio Zanecchia, an auto mechanic from Point Pleasant, New Jersey, wore a Bernie Sanders hat. "I think the establishment is unwinding and unraveling, and I think a lot of people's jaws are dropping," he said. "I'm here for the United States, and everything it was born from, which was a revolution against the establishment."

"Right now we need good leadership, tough talk, and a guy who won't back down. And that's Donald Trump," added New Jersey Trump voter Winston Hahne. "We need a shake up."

"I don't let the media dictate anything in my life," said 32-year-old Trump supporter Tonye-D’mitrias Vickers. "As a black person coming from the inner city, I was born and raised in Brownsville, one of the most roughest, toughest most dangerous inner cities in New York City. And when he says we have nothing to lose to put trust in him, I say damn right. We have nothing to lose."

Samantha Orlando, 24, wore bright red lipstick and a red blazer to match her MAGA hat. She and her mother Elise had come into Manhattan from Staten Island for the night, and booked a room at the Hilton to "be a part of that."

"I've been pro-Trump since the primaries last year," Orlando said. "He doesn't so much offend me with the things he says and does, because I'm a New Yorker and that's really nothing to me. But what offends me more is, you know, issues of national security." 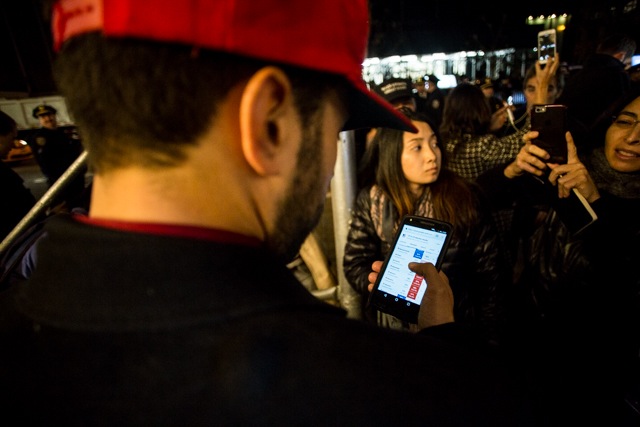 Clinton supporters expressed fear: for their own safety, and for the safety of friends and loved ones who they felt Trump specifically targeted with his rhetoric.

Sarah Misch, 26, sat on the ground at Rockefeller Center shortly after midnight, hugging her knees to her chest. "I feel like we were in this bubble and I had no idea there was an audience for what Trump is peddling," she said. "At this scale. I didn't know."

Catherine, a Clinton voter from the Bronx, said that she relies on both Medicare and Medicaid to treat her disability and make ends meet. "I'm pretty scared," she said. "As somebody who's poor and does depend on certain government programs, those could be ripped to shreds or cut down and that could seriously affect my life."

"I'm not really scared for me," said Morgan Vandurzen, 22, from Wisconsin. "I'm a straight, white woman. What's really going to happen to me? But I'm scared for minorities and my friends who are gay and disabled."

Earlier in the evening, a group of Irish students said they feared the international ripple effect of a Trump presidency. "There was Brexit, and there could be this [Trump victory], and that could also decide what way France votes [in its upcoming election]," said Gavin Welsh. "Because that's kind of the rise of the right wing. It's very global." Jean-Marie Le Pen, founder of France's far-right, anti-immigration National Front party has since tweeted his congratulations.

With Trump's victory all but sealed, Levitan, the Clinton supporter at Rockefeller Center, said she was determined to get more involved in politics.

"If we want to make changes then we need to continue to speak up for it and not let him take charge," she said. "I think that for myself, if Hillary had won I probably would've sat back a little bit more and felt relief. But with Trump in, I'm not gonna sit back. Now we have to do something about it. And pray."

Celebrating his candidate's victory a few blocks away, Brooklyn resident and Trump supporter Chris George said he was concerned about the divisiveness of the election. "I can't say I'm happy about it," he said. "I think it's reality. We're going to have to work through it. I absolutely do want some cooperation across the aisle. However, I'm not predicting it."

#donald trump
#hillary clinton
#protesters
#Victory
#original
Do you know the scoop? Comment below or Send us a Tip